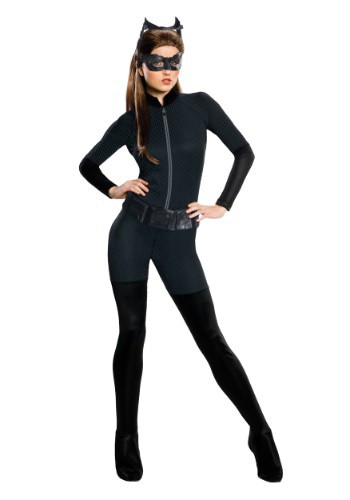 One of the most interesting things about Batman is that he is a good guy...that does bad things sometimes. He applies justice a little more...harshly...than some superheroes. And he certainly doesn’t mind breaking the law if he thinks it will ultimately serve justice. So, enter Catwoman! She’s even more muddled in morality than Batman. Like him, she’s neither good nor evil, but unlike him, she’s sometimes only concerned with benefitting herself and sometimes she cares about the good of the world. So, if you want to be the ultimate complicated character of the comic book universe, then this Adult Classic Catwoman Costume is for you!

Seriously, you never really know what you’re going to get when Catwoman is involved. That’s what’s so great about her! Sometimes she’s Batman’s nemesis, sometimes she’s his ally. And either way, she’s formidable. We can’t think of anything cooler than that!

This officially licensed costume features a jumpsuit that runs the length of your body and has attached foam shoe covers that fit under your feet. An included molded belt fastens around the waist. The eye mask—all important for keeping your identity secret from Batman and Commissioner Gordon—fits comfortably around your head and matches the cat ear headband. All you have to do now is work on your stealth moves and your ability to break into highly secure areas. Also, you may need to work on some martial arts, because Catwoman doesn’t shy away from a fight if she’s cornered.

Don’t Fall For Him

There is some serious romantic tension between Catwoman and Batman. Probably because they’re both so dark and brooding and morally ambiguous. But it’s important, when dressed as Catwoman, that you stay true to your number one concern: yourself. Sure Batman is great to have around sometimes, but only if you benefit in the end.