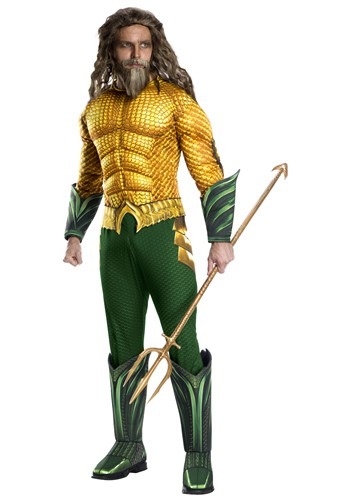 The movie, Aquaman, is bananas. We mean that in the best possible way. It has everything you could want in a movie, including octopus creatures, armored mermen riding on battle-ready seahorses, a royal struggle for power, underwater kingdoms, and some flippin’ crab people. Willem Dafoe is in there for good measure too. We saw it and we still don’t know what to think of it, except that it was completely and totally awesome. Of course, at the center of all this underwater craziness is the would-be King of Atlantis, Arthur Curry, Aquaman.

Well, we don’t want to spoil any of the plot details, but Aquaman gets himself a new set of underwater armor and it’s spectacular. It’s shining gold and really it translates the comic book armor into a ferocious look for the movie. Now, you can have the ferocious superhero style when you wear this Aquaman costume for adults.

The Aquaman costume is officially licensed from the DC film and it will have you ready to battle it out with any villain. It comes with a full body jumpsuit that has muscle padding in the chest and arms to give you a buff look, just like Jason Mamoa. The top portion of the jumpsuit has the golden scale pattern of Aquaman’s signature armor, while the pants portion is a deep army green color. The suit also has attached gauntlets on the sleeves and boot covers on the pants, so you can wear your favorite boots with this costume. It also comes with a foam belt that fits around your waist to put the finishing touch on the iconic look.

THE ROAD TO THE THRONE

If you want a chance at the Atlantean Throne, then you’re going to need a stellar outfit, like this Aquaman costume. Just be warned! If you actually want to be the King, you may have to face off against baddies like Black Manta and Ocean Master!