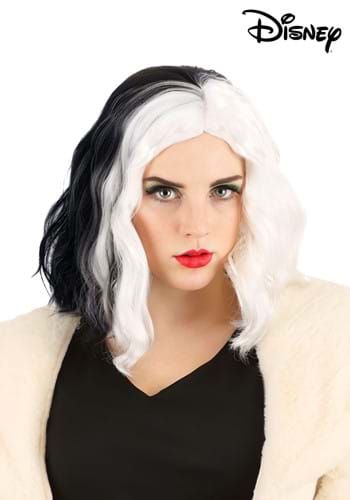 Cruella’s entire aesthetic revolves around that fabulous combo red, black, and white. So, it makes sense that she likes dalmatians so much—they fit her tastes. However, it must be said, she’s missing some uniquely styled dog breeds that fit within her preferred color palette too. Sure, dalmatians are sleek and that chaotic splash of black and white on their coat is exciting, but we’re here to suggest an alternative that’s sure to relieve Pongo and Perdita.

In place of more darling dalmatians, we think Cruella would benefit from combing through the coats of dogs like, say, an English Setter. Equally speckled with black and white, setters have a few more tricks to their appearance—namely a shaggy and styleable coat. Which, as any true fashionista knows about hairstyling, is essential to perfecting an ensemble.

Complete your Cruella costume with this Trendy Cruella Wig! Whether you’re looking to reinvent the iconic character or simply want to update her unique hairstyle, this officially licensed accessory has you covered. Starting with the black and white hair Cruella wears in Disney’s One Hundred and One Dalmatians our team of designers leaned into the trendsetter vibes the villain could have had. Lengthening the original style to the shoulders, giving it a gentle wave, middle part and more evenly split black and white color, this modern long-bob hairpiece easily gives Cruella a softer appearance. And made from high-quality synthetic fibers, there’s zero cruelty in this Cruella accessory!