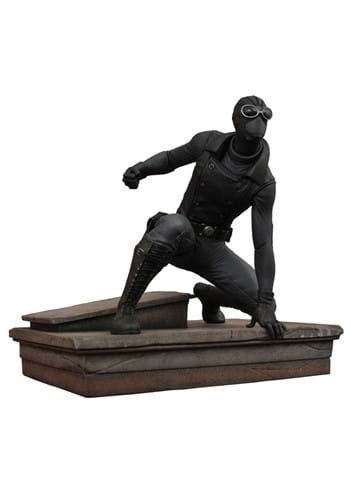 In a city filled with crime... there's only one man who's capable of tracking down the clues to catch the culprit. Spider-Cop! He's the tough-as-nails detective who's hot on the case. He won't stop until he's nabbed the villain... much to Yuri Watanabe's dismay. We always imagined Spider-Cop as being the kind of superhero who wears the Spider-Noir suit from the PS4 Spider-Man game. That's exactly why we've taken to nicknaming this Marvel Gallery PS4 Spider-Noir Statue the "Spider-Cop Statue."

This officially licensed statue is a collectible from the video game. It's molded into the shape of Spider-Man sneaking around a building top wearing the Noir-style suit. It stands nearly 7 inches tall and comes in a full-color window box, so you can display it in, or out of the box. Oh, and using the Spider-Cop voice while talking about the statue is a complete must!