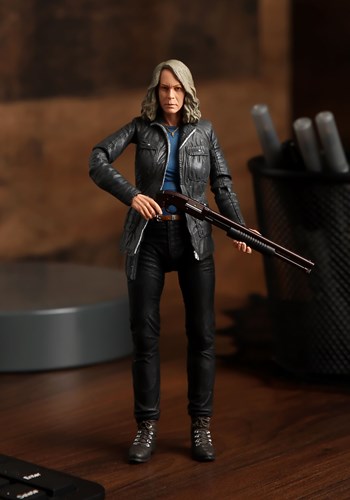 Laurie Strode has seen some stuff. Over the last 4 decades, she's had to witness Michael Myers untethered brutality unleashed upon the world. She's watched him "die" on multiple occasions. These days, she knows better. He could come back at any time, looking to enact his cruelty once again...

That's why this Halloween 2018 Laurie Strode Action Figure carries a shotgun. If Michael Myers finds his way back to her again, she'll blast him to back to the Stone Age. He might just come back again. He always does, but at least that shotgun might just buy her a few years before the next sequel comes out!

This Halloween 2018 Laurie Strode Figure is an officially licensed figure. It's a 7-inch scale figure with a realistic sculpt and 14 points of articulation. She also comes with alternate pieces, including different heads and hands that snap into place. That means you can customize your figure and pose her in various movie-accurate poses. She also comes with weapons that fit into her hands, since she needs to be prepared for the inevitable return of Michael Myers. It's a great figure for any fan of the Halloween series!