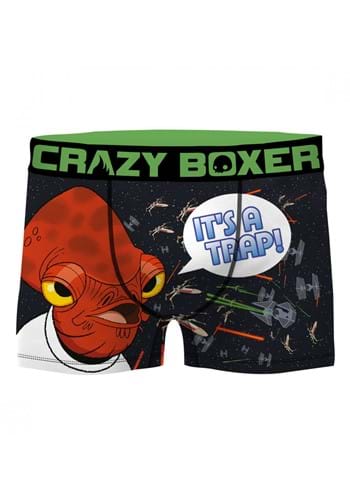 Some speeches are destined to go down in history. They are so memorable, so powerful, that they can be evoked with just a few words. Remember the Alamo! We shall fight on the beaches! Fourscore and seven years ago, our fathers brought forth, on this continent, a new nation! These unforgettable words encompass the genius, the shrewdness, and the inspiration of which humanity is capable. Well, humanity and alien beings. Let’s not forget that other galactic species are perfectly capable of memorable lines too!

It’s a trap! Just kidding. It’s definitely not a trap to wear the Crazy Boxers Star Wars Admiral Ackbar Boxer Briefs for Men! They are officially licensed, covered in hilarious graphics, and made of such comfortable material that you’ll definitely want to wear them when you face off with the Imperial Fleet and a half-finished Death Star. No Ewok assistance is necessary!