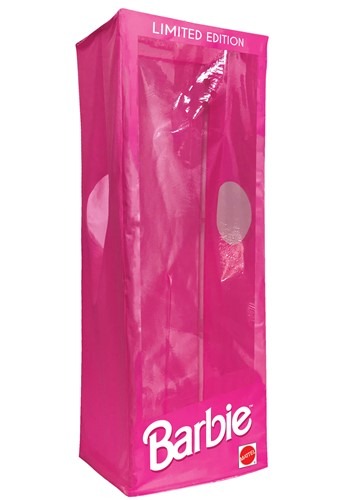 Chances are none of your Barbie dolls stayed in mint condition. Hopefully, you slowed down on the hair cutting phenomenon enough to save a couple from a botched bob or crooked pixie. If they were lucky, you put down the magic markers and nail polish long enough to leave some of them with their original makeup. Though, maybe the dolls that received extreme makeovers were actually the lucky ones?

All that practice you did to develop your hairstyling and makeup artistry skills have surely flourished now. And you know those made-over Barbies got to wear the coolest outfits that fully influenced your own designs later. Pairing together disco pants and cherry-print blouses was inspired. And creating a fluffy boa out of a stretched-out cotton ball totally made an impact on whatever outfit it accessorized. Maybe no one else thought your completely altered Barbies were worth much back then, but if you could ask your kid-self what they thought of each Barbie, they’d tell you each was better than the original.

Get in touch with your Barbie make-over skills again and get ready to show them off! Whether you throw on a life-sized version of your favorite Barbie ensemble or create something new, you’ll be ready to keep that look in mint condition with this Adult Barbie Box costume! This simple tunic is ready to put your creativity on display behind the clear vinyl windows. The box stays rigid with the help of 8 top and bottom poles, 12 side poles, and 8 corner connectors. Instead of throwing out the bright pink box that your favorite Barbie seemed trapped inside, you’ll want to wear this clever costume to all the costume parties to preserve your style!

Better than the Classics

There was no way your Barbies were going to stay in perfect condition when you were a kid. It’s not in a kid’s nature to let Barbie’s hair stay long and blonde or her pink eye shadow from turning green. But now you can show off your Barbie transformation skills with this Barbie Box costume and prove that an original creation is just as collectible as a classic!