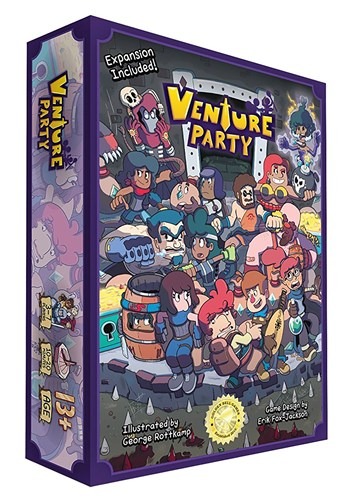 Sometimes, you don’t always get the perfect party. Sure, you WANT Grimdhalf, the Master Mage to join you on your quest. After all, he knows every magic spell in the tome. A few simple incantations from him and he can summon a fiery inferno to dispatch a whole army of goblins. Unfortunately, he’s not available. When he's busy, you just have to just settle for Jerry, the Bumbling Wizard, to join your party. He can cast spells too, but he mostly just ends up accidentally lighting his hair on fire when he waves his wand. Hey, sometimes, you just have to take what you can get!

That’s what Venture Party is all about! You must gather up a party of misfit adventurers, who are as much a danger to themselves as they are to the monsters. Your goal is to snag as much loot from the dungeon as you can… often at the cost of your perilous party members!

The Venture Party Card Game comes with recruit cards, loot coins, a bag of holding, reference sheets, and more. Each card as an unlucky adventurer depicted on it, from the “Not So Subtle Spy” to the “Negligent Illusionist”. This version of the game even includes 16 bonus expansion cards to help you on your journey! It plays 3 to 7 players and is suggested for gamers age 13 and older. The game’s irreverent brand of humor and unique take on fantasy is a welcome addition to any gamer’s arsenal of board games.