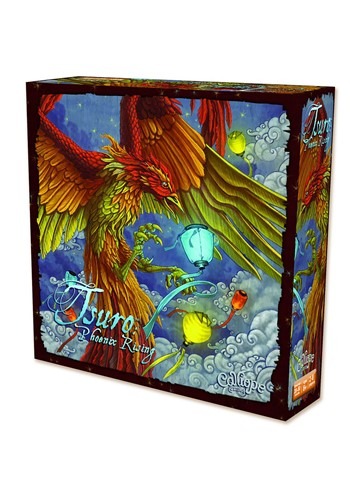 Legends say that far off in the past, some dark deities stole away the bright colors of the sky. Hardly fair, right!? Without those, the night is just dark and dreary! Folks weren't going to stand for that kind of mischief, though, so they sent up lovely flying lanterns to brighten up the sky. Naturally, those weren't going to stay up there forever, but they had to try!

That's when they were all shocked to discover that a brilliant phoenix began flying through each, magically transforming the hopeful lanterns into genuine stars. The people gave thanks and prayed to their favorite until only one phoenix remained, the true hero to all people!

We don't know if that legend is true, but we do know that you can have a lovely time playing Tsuro: Phoenix Rising in order to make the story feel just a bit more genuine. In this game, 2-8 players can join in a peaceful game of strategy and tiles as you create pathways through the skies for your phoenix token to soar. (Just like in the original Tsuro.) This version flips the game (somewhat literally) by offering double-sided tiles that flip and rotate throughout play to change the paths as you turn lanterns into stars and pave your way to legendary status.

There's nothing sadder than watching your lovely token soar out of the skies in Tsuro a little too early. Fortunately, your phoenix has a chance to create magical stars and become reborn even if they have a little whoops early in the game! Bring this delightful revision to Tsuro home and claim the night sky for yourself.