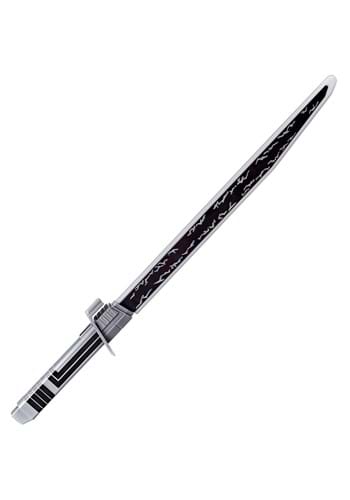 Lightsaber? Who Needs One!

It's a Jedi tradition. Crafting your own lightsaber is sort of a rite of passage. It's an elegant weapon for a more civilized age, or that's what Obi-Wan Kenobi always seemed to think. But what about Mandalorians? Surely, the most skilled warriors in all of the galaxy could be a match for a Jedi in melee combat, even if not all of them are skilled with the ways of the Force! Well, it just so happens that a legendary blade, The Darksaber, was crafted as a weapon that could rival the Jedi's own lightsaber.

Crafted by Tarre Vizsla, the first Mandalorian to be trained as a Jedi Knight, and reclaimed by Pre Vizsla, the Darksaber is a weapon that only the most talented of warriors can wield. It made it into the hands of Moff Gideon during The Mandalorian. Now, the honor of wielding the weapon falls to you!

This Star Wars Electronic Darksaber comes officially licensed from The Mandalorian. The saber recreates the iconic weapon seen in The Clone Wars and The Mandalorian in plastic. Just press the button and the sword lights up and makes realistic sounds. Once you have it in your hands, you'll be ready to fight off any Jedi!