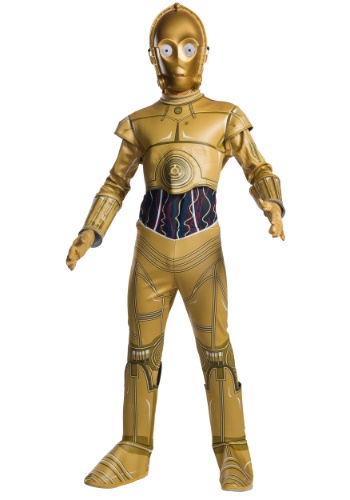 Sometimes you just don't understand human behavior! There you were, an excellent protocol droid programmed to understand and communicate in over six million forms of communication, in the middle of a firefight on a starship! Then your odd little droid friend R2-D2 insisted on dragging you along on a crazy adventure to deliver a princess's message to an old Jedi Knight when he KNEW that you would much prefer to stay out of it and keep Tatooine's sand from clogging your joints, thank you very much. But it all worked out in the end. You met some wonderful new friends, became a hero, and learned a valuable lesson: Always let the Wookiee win!

You might not have to know a power socket from a computer terminal, but you definitely know a good costume when you see one! This officially licensed Child Star Wars C-3PO Costume is perfect for any small Star Wars fans out there who want to join the Rebels' fight against the Empire. The golden jumpsuit-style outift is printed with graphics to look just like the beloved worrywart droid, including his plating, cuffs, and exposed midsection "wires." Golden gloves cover your human hands and shoe covers disguise your everyday footwear. The matching full-head mask has viewing points so that you don't run into any unseen Storm Troopers while you're trying to rescue Princess Leia.

Part of a New Hope

As part of the Rebellion, you might have a lot of worries, but you'll never be bored! Han, Luke, Leia and R2-D2 will be delighted to have you on board as they take on Palpatine.