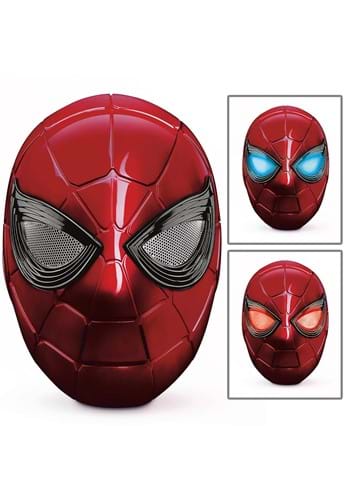 It is a well-known fact that Peter Parker is a genius. He predominately studied biochemistry and biophysics, but the guy hangs out with Reed Richards and Tony Stark, so I'm sure he's picked up a few things. Outside of being broke, and wanting to protect everyone—at all times, Spider-Man's intellect is one of his more defining characteristics. His web-shooters are definitely his most famous invention. Outside of Spider-Manning, the application for those puppies would be endless. The thing with Spider-Man is he tends to only get in the lab when he needs something specific to defeat a villain. If he really took the time to tinker, who knows what he could come up with?

There was an alternate reality Spider-Man who actually used armor akin to Iron Man, instead of the normal spandex getup. His gear was silver, so technically, it isn't cooler than our Marvel Legends Series Spider-Man Iron Spider Electronic Helmet (biased, maybe—correct, absolutely). This helmet will cover your whole head. Perfect for cosplaying, or freaking out your roommates. You'll really freak them out once they see that the eyes can glow red or blue. There are even 6 different light modes. If you need to change the 2 AA batteries, the forehead panel pops off to reveal a battery compartment. This is the helmet Peter should have always worn but he is not going to wear it, the responsibility now falls to you. Uncle Ben would be proud.