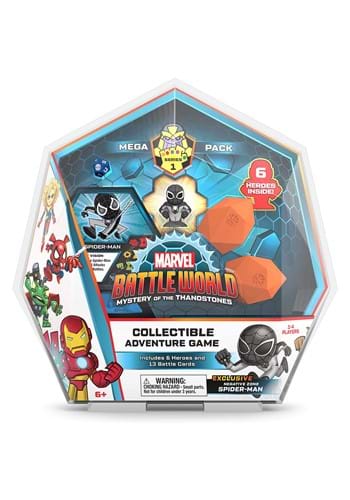 Marvel has a way of creating a whole bunch of intrigue that lays in wait. It's only natural that when you combine Marvel and Funko surprises that you're bound for something even better. Will there be a new hero that waits to be discovered? How about an adventure that you never expected? Well, maybe in your imagination. Funko figures don't often get to do more than look fantastic, we suppose. Of course, when you combine all of that into a few rounds of an epic board and card game, the multiverse is changed for good!

It's time for the ultimate in Marvel fun with the Marvel Battleworld Mega Pack Game! Play on your own or with a team of friends as you pick your favorite hero and fight against a host of baddies in order to take Thanos down. This is a cooperative game that involves collecting new characters from the Marvel multiverse. Pick your favorite hero and make use of their unique special abilities as you draw and arrange battle cards in front of you. Choose a fight and roll the dice to see if you succeed in a series of up to five fights. If you win three, the battle is yours and you are one step closer to claiming the Thanostone. If you lose three, though, add a danger token to the field... because you're just a bit closer to Thanos claiming victory for himself!

Just because the Mad Titan has a ton of power doesn't mean that he's undefeatable. In fact, when you combine the right heroes together, you can take some of that strength for your own! Gather up some friends and fight against Thanos in Marvel Battleworld and uncover more heroic allies to make the game even better next time.