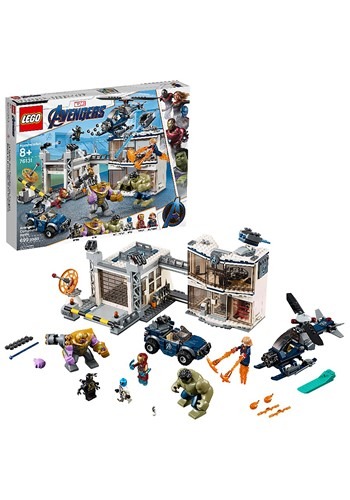 The big battle is afoot! In one corner, we have Iron Man, Captain Marvel, Hulk, and Nebula. In the other, we have Thanos and his minions. Who will win? Well, that's completely up to you when you're playing with this LEGO Marvel Avengers Compound Battle Set! This officially licensed set comes with all the pieces you need to build an Avengers compound, along with a whole plethora of LEGO minifigures. This set even comes with a tiny Ant-Man figure! It's recommended for ages 8 and older, but we can assure you that it's okay for adults to play with it too (we test it out)!

This 699 piece Lego set has all the parts you need to build the six-inch-high by eleven-inches-wide Avengers Compound with a two-level office, a laser beam safe. and two types of shooters. You'll even be able to build a helicopter and off-road car to keep Thanos and Outrider at bay! Tuck the car away in the garage with a rolling car door and shoot at villains with the dual stud shooter. The mini-figures include heroes such as Nebula, Iron Man, a bulky Hulk, Captain Marvel, and a teeny-tiny Ant-Man. You'll even get a few villains such as Outrider and Thanos! This interactive Avengers Lego set is full of interactive, action-packed fun!