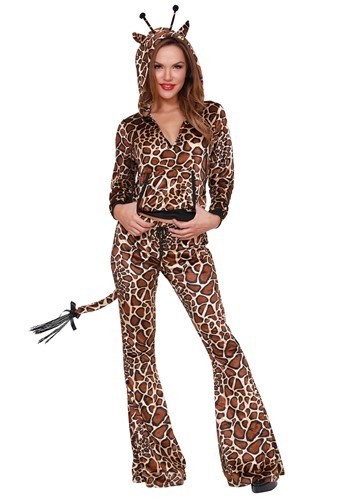 Every animal on the African savannah has its own personality. Not many people know that while adorable, meerkats are rather gossipy, whispering about what the zebras have been up to while they're lounging in their dens at night. It's no surprise to anyone that lions are total divas, starring as the main subject of stories for a century now has really gone to their tawny heads. Cheetahs have a pretty immature sense of humor while warthogs have a macabre imagination. And of course, it's a well-known fact that keeping a giraffe around is rather high maintenance. With that long neck of theirs, they're easily distracted. After all, if you're not amusing them, they can turn their heads and see someone much more interesting on the horizon through their gorgeous long eyelashes. Move over Housewives, African savannah politics can be just as exciting the most enticing reality television.

This wild costume will bring to mind African adventures as soon as you enter the room. While no giraffes were injured in the making of this costume, it's patterned with an intricate giraffe pattern. The costume includes a pullover hoodie with a pocket in the front. The hood is detailed with ears and the pom poms that are called ossicones (if you were wondering). Flared printed pants with a dangling tail attached to the back complete this ensemble, making you ready for your Savanah debut.

At fifteen to twenty feet, giraffes are easily the tallest mammal on earth. That's pretty darn tall. But don't worry, you don't have to balance on stilts to pull off this chic ensemble. The ossicones and the unique pattern communicates the spirit of this lofty beast. Just be sure to take on the giraffes hoity-toity personality that makes this animal one of the poshest on the African prairie!