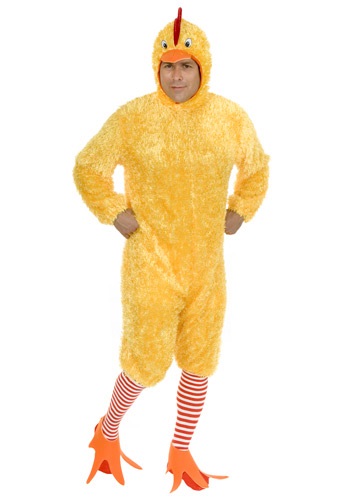 We're not going to lie to you, chickens scare us a little bit. We know that they aren't really mean or anything, but just their general appearance makes us uneasy. They have these beady little black eyes and a sharp little beak that looks sharper than a knife. If we accidentally made a chicken angry and it decided to attack us, we aren't really sure who would win that fight.

So, you can imagine the confusion and conflict of emotions going through our head when we saw this costume. On one hand, it's a chicken, which definitely scares us. But it certainly doesn't look like an evil chicken. This is like the least intimidating portrayal of a chicken we have ever seen. After all, while it is a chicken, it is a funky chicken. This costume feels downright comical. All of these mixed emotions have us so confused!

This costume is two parts funky and one part chicken! It all starts with the jumpsuit you'll be wearing. The jumpsuit is bright yellow and has ties on the back to secure it in place. It also has elastic around the wrists and knees. Below the jumpsuit, you'll be wearing red and white striped socks, and below that, you'll be wearing shoe covers. The shoe covers will turn whatever shoes you wear into chicken feet! And of course, there's the headpiece. The headpiece has eyes, a little beak, and a crest, making this costume instantly recognizable as the scariest barnyard animal.

We don't think that we are the only ones afraid of chickens. When you go out as a funky chicken, it's time for you to break the stereotype that chickens are scary. This entails acting as harmless as possible. Be the funkiest chicken you possibly can, and people might start to see that chickens aren't so bad!