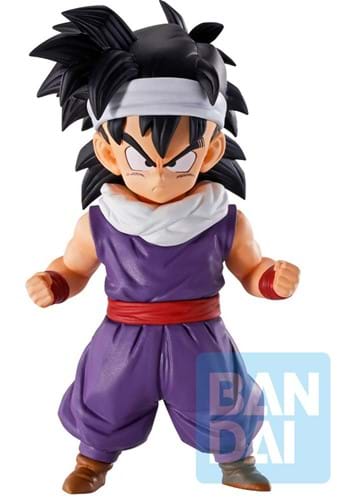 Gohan looks like a cute little tyke, but he's a lot tougher than he looks. He's fought against heavy hitters like Raditz, Vegeta, and he even took down Perfect Cell in his youth. And if we've learned anything about the young Z Fighter, it's that you don't want to get him angry. He power level goes through the roof! Well, it's a good thing that this Dragon Ball World Tournament Super Battle Ichibansho Figure is just that... a figure, because he looks mad and ready for a fight!

This Son Gohan Figure does a great job of capturing Gohan from the earlier days of Dragon Ball Z. He's wearing his purple fighting gear, like he wore when he was training with Piccolo. The figure stands 4 inches tall and is made out of molded vinyl. He'll be ready to do battle with any villains you might have hanging out in your Dragon Ball collection!