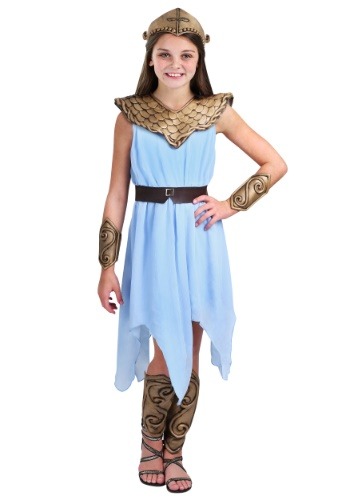 So, you want to dress as Athena? We don't blame you! If you ask us, Athena's the strongest of all the Greek Gods and Goddesses. As the Goddess of wisdom, there is nothing she can't do if she puts her mind to it! Sure, Zeus has his lightning and Poseidon has his trident, but that is nothing compared to the power of the mind. If Athena wanted to, we think that she could easily Take the throne on Olympus for herself.

So, why doesn't she? Well, we are dealing with the Goddess of Wisdom! If she doesn't want to, there must be a very good reason. Maybe she doesn't want to be in the spotlight. Maybe she has more freedom when she's not completely in charge. Whatever her reason may be, we trust her. If anyone would know what they are doing, it would be her! She is not someone that we would ever want to upset.

This costume will turn you into Athena herself! Though, if we had to guess your probably pretty smart already if you want to dress as this goddess. You'll be wearing a simple blue dress, accented with a belt and the gold shoulder piece. The Shoulder piece is the first part of your godly armor. You'll also be wearing gauntlets and leg guards, which serve as both protection and a fashion statement! Lastly comes your crown. The crown has an adjustable back, so you won't have to worry about whether or not it'll fit!

When you become the Goddess of Wisdom, what are you going to do with all of that knowledge? Maybe you could do us a favor and tell us what came first, the chicken or the egg? Somebody brought it up to us the other day, and it's been kind of keeping us up at night.