What's Luck Got to Do with It? FUN Facts About Luck Around the World [Infographic] 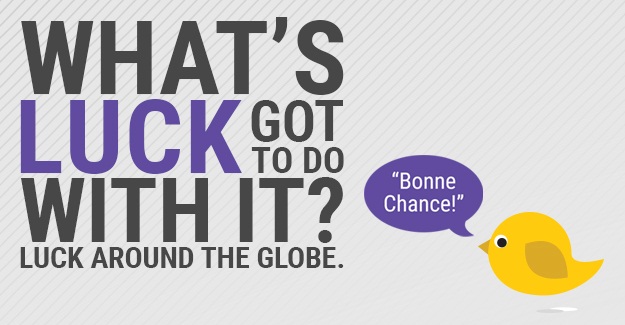 Crossing your fingers. Keeping a worn-down penny in your pocket. Keeping a bamboo plant by your bedside table. EVERYONE has a way to ensure good luck in their lives. Some are cute, like rubbing a Buddha statue’s jolly little belly. Some are delicious, like chomping down a bowl of Lucky Charms the morning of a big test. Aaaand some are … less than cute OR delicious, like wearing that lucky pair of, ahem, unwashed underwear to your job interview. Regardless of what the tradition IS, have you ever wondered where some of the most well-known lucky superstitions and objects came from? Like, why exactly IS knocking on wood good luck?

With a holiday full of kismet and serendipity coming up – St. Patrick’s Day is March 17th, just in case you forgot! – we figured we’d spend some time researching LUCK from around the world. Here are different customs, superstitions, phrases, people, and symbols from countries all over the globe. ¡Buena Suerte!

What's Luck Got to Do With It? Luck Around the Globe Transcript

Every culture around the world has its own traditions for good luck. While a lucky penny or four-leaf clover may be commonplace to some, other people might look instead to a pig or an acorn for good fortune. Want to know more about the history of different lucky superstitions, symbols, phrases, and people around the globe? Look below! To read more about each fact, find the matching icon underneath the map to see a description. Bonne chance!

The four-leaf clover became a good luck charm in pagan Ireland. Legend states that St. Patrick used the three-leaf clover to explain the Holy Trinity (Father, Son, and Holy Spirit). When the fourth leaf was present, that represented the grace of God.

The luck cat, Maneki Neko, beckons good luck and fortune into your home or workplace with its waving paw.

Old decks of cards featured a pig on the ace, which led to "die sau" being considered lucky.

The horseshoe legend is: a blacksmith was approached by the devil to put horseshoes on his hooves. After he did, the devil was in pain and wanted them removed. The blacksmith did, but only after the devil promised that he would never go into a house that had a horseshoe placed above the door.

The Mystic Knot is used in Chinese feng shui. The knot is created by tying together six infinity knots, and it represents never-ending good luck. (Place in the southwest or southeast area of your house for the best results.)

Acorns have been considered good luck in Norse mythology, since the days of the Vikings. Since lightning, which was associated with Thor, was drawn to oak trees, the Norse believed that he favored acorns, which grew on the trees. They would place the acorns on their window sills as good luck against lightning.

It's said that the Aborigines in Australia saw frogs as an indicator of good luck for crops; the animal was said to help plant growth, by bringing in storms and rain.

Patron saint of travelers. (Often used as a lucky charm in cars.)

Patron saint of soccer/football. (Often prayed to in Argentina.)

The luckdragon from The Neverending Story.

At midnight on New Year's Eve, the Spanish eat 12 grapes, which symbolizes good luck for each month in the upcoming year.

Consider yourself lucky if a bird poops on you in Russia! They believe that that is a sign of good luck to come. (Or a shower.)

The sign of crossing your fingers for good luck dates back to early Christianity, where people used this hand gesture to summon the protection of the cross.

Knocking on wood is an action in many cultures to protect from bad luck, but it is said to have originated in Germanic folklore. Knocking on wood was thought to summon dryads, or tree nymphs, who would bring good luck.

The tradition of a bride putting a penny in her shoe on her wedding date dates back to the Victorian era, and it is said to bring the couple good luck and prosperity!

Insulting your baby doesn't seem like it would be good luck, but it is superstition in China! Tradition says that by calling your child mean names, evil spirits would be tricked into thinking that it wasn't a baby and leave it alone.

It's considered good luck to save up all your broken dishes throughout the year and throw them at your friends' homes on New Year's Eve. The more broken pieces, the better year you will have!

Germany: This idiom translates to "I had a pig!" Pigs are known to be lucky in Germany.

France: This phrase in French translates to a less-than-sweet sounding "I wish you s*@#!" It's the equivalent of the theatrical "break a leg!"

Japan: In Japanese, this is the polite way to say "do your best."

Italy: This literally translates to "into the wolf's mouth" and is another example of a "break a leg"-type saying. The response is "crepi lupo", which means "may the wolf die."

Africa (Swahili): This is a nice way to wish your friends all the best!

Russia: Here's a casual way to wish your family and friends good luck in Russia.

Inuit (Alaska): This daunting phrase is the Inuit way to say "good luck" to your friends in the frigid North.

Quebec: While the true French in Europe may have a less-than-nice way to wish luck (see "Je te dis merde"), Canadians are known for their polite nature. This phrase is the straightforward translation of "good luck" in French.

Has this inspired you to take control of your own destiny? With all this knowledge, your good fortune is practically in your own hands now! What is your favorite of these? Is it the bird poop from Russia? That’s ours, too.