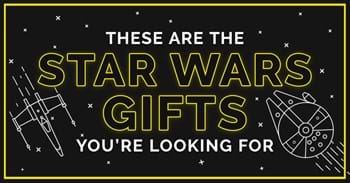 Welcome to the ultimate Star Wars gift guide! As one of the most popular franchises around, it's no wonder that you may be asked to attend a Star Wars party or tasked with finding Star Wars gifts for a birthday or other occasion. We've searched from the Core Worlds to the Outer Rim Territories to locate all the best Star Wars everything that the galaxy has to offer. Whether or not you're familiar with Star Wars, we'll share just what you need to know to have a successful Star Wars party. Whether these Star Wars gift ideas are for you or someone else, we'll walk you through picking out the perfect Star Wars bag, LEGO set, or lightsaber. Just in case you're not a Star Wars expert, we'll start with some Star Wars FAQs so you won't feel totally out of place—but we'll also leave a link so you can make the jump to…hypershopping!

Click here to jump right to the Star Wars gift guide or keep reading to boost your Star Wars knowledge!

What Genre is Star Wars?

It's tricky to tackle what the essence of Star Wars really is. It has sci-fi elements, action, adventure, drama and more! However, there is a strong argument that Star Wars falls into a fantasy setting, as well as space opera. The introduction of the Force is, what one could say, the driving force for the argument that Star Wars is a fantasy movie set in space. As an element that can't exist in our reality, it's purely fictitious. There's also a strong case for Star Wars as a space opera. While the core movies tend to lean in one direction, just know that the introduction of additional TV series and spinoffs can have their own genres! For example, the popular Disney+ series, The Mandalorian is very much a space western. We can't wait to see what new surprises the Star Wars franchise has in store for everyone!

What are Star Wars fans called?

As you may very well know, there has been a years-long debate about whether Star Wars or Star Trek is better. (We'd like to say that you can legitimately enjoy both!) Star Trek fans are commonly referred to as "Trekkies" or less commonly "Trekkers", but what about the Star Wars fans? Believe it or not, Star Wars fans don't have an identifying name for themselves, unlike many other geeky fan communities! And you know what? That's okay, too.

Who are the good guys in Star Wars?

Like many other fantasy and sci-fi series, Star Wars has a good vs. evil fight brewing between two opposing sides. There are political movements as well as fights over the Force and its use, creating two struggles with two sets of "bad guys" and "good guys". There have always been differing views on the Force, with the Jedi (light side) fighting against the Sith (dark side). The perspective is usually that the Jedi are the good guys, while the Sith are the bad guys.

Then you have the Rebels and The Empire. The prequel trilogy shows how the Galactic Republic became The Empire, which is in full control of the galaxy by the time of the original trilogy. After the events of the original trilogy, it is revealed that the Empire is no more, and instead, you have The Resistance and the First Order. (The First Order rose up from the shambles of the Empire.) As we continue to see an expansion of the Star Wars universe, we'll probably see more governments rise and fall, but the light and dark sides of the Force are likely to continue as they always have.

How long ago was Star Wars?

The first Star Wars movie was released on May 25th, 1977. It was originally titled Star Wars, and later changed to Star Wars: A New Hope 1981 after its re-release.

What to know before watching The Mandalorian?

The Mandalorian occurs 5 years after The Return of the Jedi, which is the last film in the original trilogy. With the Empire licking its wounds, you're getting a glimpse at the rise of the First Order, which plays a huge part as the big bad of the sequel trilogy. If you're hoping to binge-watch some Star Wars movies or TV series during the party, don't forget to check out some of our favorite Star Wars drink and snack recipes!

What to wear to a Star Wars party?

This may differ from event to event, but in general, Star Wars clothing is encouraged. That may mean wearing a Star Wars shirt or hat. However, if it's specifically a Star Wars costume party, costumes may be encouraged or even required! And who doesn't love a fun costume party? You'll see that we have plenty of Star Wars apparel and costumes in the gift guide below should you be interested in snagging something for yourself before you attend.

Now let's look at our favorite Star Wars toys for kids and adults! (Most of these toys may be meant for kids, but you have the right to collect whatever you want.) This is such a vast and varied range of gifts, from The Child electronic plush to toy lightsabers and Star Wars Black Series action figures. If you're interested in Star Wars action figures, be sure to check out our guide to Star Wars licensing. They've sold a lot of toys! And some of the most valuable action figures of all time were the early Star Wars figures! Who knows what the Star Wars toys of today will look like in the future?

Loved by kids and collectors alike, nothing scratches that itch for Star Wars gifts quite like Star Wars LEGO sets. You can find a variety of ships and scenes, as well as buildable characters to assemble and collect. (Not to mention several Star Wars LEGO characters to make the sets even more fun to play with!) Kids will love helping the Ewoks save Endor or flying around the galaxy in a speedy tie fighter. However, if someone gets their joy out of LEGO Star Wars sets by putting them together and setting them out for display, there's nothing wrong with that either!

If you want to show your love for Star Wars but you're not attending a convention or costume party for some weird reason, the next best option is to buy Star Wars shirts online from us! They're comfy, they're warm, and—best of all—they won't make you look like some kind of nerf herder when you're out in public. These Star Wars clothes will have you saying "my dear friend, how I've missed you" whenever you put something on!

If you're a huge Star Wars fan and want to show it off, then you can't forget about your home and office! Star Wars décor like our Wampa rug are a FUN way to make any place Star-Wars-y. And, don't forget some cool Star Wars wall art to show off. Add in a decorative tapestry throw and some Star Wars lighting solutions, and you're well on your way to making the Star Wars-themed man cave of your dreams.

If you or a friend or family member love to create Star Wars bounding outfits or the more casual Star Wars ensembles, you'd better pick up a few Star Wars accessories so the look is complete! Star Wars bags and purses are great at conventions and Galaxy's Edge so no one can spot your civilian gear, but even a new pair of socks or a Star Wars hat are great as everyday wear. Don't forget other small items like keychains and pins, which made great Star Wars stocking stuffers too! We're sure that Star Wars fans will appreciate these thoughtful gifts at any time of the year.

Do you need kitchen items worthy of your adventures in cooking? Swap your glasses with Star Wars drinkware, from this Stormtrooper mug to the whole line of Star Wars Geeki Tikis! Maybe a friend or family member needs a kitchen apron set worthy of the Rebel base. And who could possibly pass up an adorable Baby Yoda cookie jar or a set of Darth Vader and Stormtrooper salt and pepper shakers? (They're even black and white so you won't forget like with other novelty salt and pepper shaker sets!) In a Star Wars-themed kitchen, every meal gets to be exciting!

Who doesn't love tech toys and gadgets? Sure they may not feel as futuristic as the ones they have available in the Star Wars universe, but a Baby Yoda clapper light is pretty nifty. Listen to your favorite Star Wars soundtracks with a pair of Star Wars headphones, or reenact one of your favorite scenes with a friend over some walkie-talkies. These delightful Star Wars gadgets are sure to make you feel a little more futuristic.

So you're in need of a Star Wars costume. Maybe it's for Halloween or just for binge-ing The Mandalorian or The Clone Wars at home. You've come to the right place because we carry the best Star Wars costumes at FUN.com. We've got The Child (Baby Yoda) costumes and The Mandalorian's Beskar Armor costume, of course. But we also carry classic Star Wars costumes, from Princess Leia to C-3PO and Wicket. We also have a pretty snazzy Lando Calrissian cosplay costume. You could even wear it to a Star Wars convention! These costumes are perfect as family dress-up Star Wars group costume ideas or when you're going…Solo. Just be sure to pick up any accessories, like a Star Wars lightsaber or prop replica! (Just make sure the lightsaber you choose fits your character!)

And Now for Some Questions about Lightsabers

Did Obi-Wan Have a Green Lightsaber?

No, Obi-Wan Kenobi had 3 lightsabers and all of them were blue. His first lightsaber was lost during his duel with Darth Maul and his second was taken by the Geonosians. Obi-Wan used his third lightsaber in both duels with Anakin/Darth Vader.

Who Has Darth Vader's Lightsaber?

Darth Vader used several lightsabers, but two of them were particularly notable. Anakin Skywalker's second blue lightsaber was taken by Obi-Wan Kenobi and then it passed to Luke and finally Rey. Darth Vader's red lightsaber was lost and presumed destroyed along with the Death Star II.

Does Darth Sidious Have a Lightsaber?

Darth Sidious had two lightsabers, both with red blades and nearly identical. He used one of them in a duel with Mace Windu and other Jedi Masters, and the other in a duel with Yoda. Of course, Sidious tended to let servants like Darth Vader do his bidding.

What Color is Qui-Gon Jinn's Lightsaber?

Qui-Gon Jinn used a green lightsaber throughout his time as a Jedi, up until his death in the duel with Darth Maul. Obi-Wan's own lightsaber was destroyed in the same duel, so he used Qui-Gon's lightsaber briefly to defeat Darth Maul.

From Star Wars collectibles to decor to costumes, we hope you found the Star Wars gifts you're looking for. But keep in mind that we have a whole selection of Star Wars gift ideas beyond this gift guide, so check them out! If you have any questions about lightsabers or other Star Wars lore, let us know in the comments and we'll try to answer them in a future article!