Wonder Woman is one of the most important and powerful characters in comic books. She is an original member of the Justice League of America and, along with Superman and Batman, forms the “Trinity” of the DC Comics universe. She has single-handedly defeated supervillains, gods, and at times even Superman. That’s because Wonder Woman is herself a demi-god—created by or born to Greek gods, an origin that changes from time to time—with an impressive set of abilities, weapons, and armor.

It’s not only Wonder Woman’s origin that has changed over nearly 80 years, but many other aspects of her character as well. So let’s look back at those changes! We can’t hope to recount every single event in her life, but rather provide an overview of Wonder Woman through the “ages” of comic books. Before we dig into that biography, though, let’s look briefly at her creators.

The Creators of Wonder Woman

Wonder Woman was created by William Moulton Marston, writing under the pen name Charles Moulton. Marston was a psychologist who taught in Washington DC, Massachusetts, and California. He invented the systolic blood pressure test, which measures arterial blood pressure while the heart beats. (It’s the first number of a standard blood pressure test.) That test became part of the polygraph—you know, the “lie detector” machine—and Marston helped to promote it. Marston also researched human emotions and wrote a number of articles and books on popular psychology and self-help. Perhaps his most influential psychology text, Emotions of Normal People, set out DISC theory, which at that time stood for Dominance, Inducement, Submission, and Compliance.

Marston was also a supporter of feminists and suffragettes and saw scientific evidence for women’s inherent mental and physical abilities. In his personal life, he was married to psychologist and lawyer Elizabeth Holloway Marston and was the partner of Olive Byrne…at the same time. Both women influenced Wonder Woman in their own way, primarily Elizabeth Marston in her personality and Byrne in her appearance. William Marston fathered two children with each woman, who stayed together after his own death in 1947. If you know anything about Wonder Woman already, you’ve probably noticed that many themes in Marston’s life—truth versus lies, dominance versus submission, powerful women—found their way into his comics. 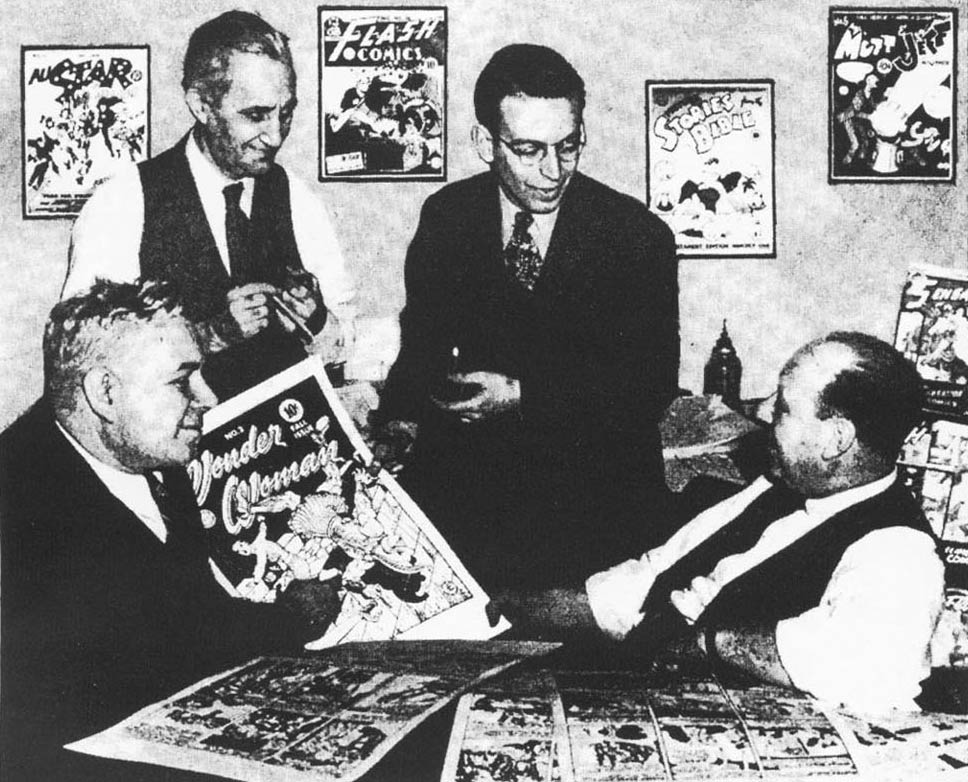 Of course, we can’t forget artist Harry George “H. G.” Peter, though many people do. Reflecting the themes of Wonder Woman, he went with a modernist Art Nouveau style when penciling the artwork and then inking the main characters. Outside of the Wonder Woman comics, Peter also worked on feminist political cartoons. He worked on Wonder Woman until his death in 1958, 11 years after Marston.

The Biography of Wonder Woman

Wonder Woman debuted in the story “Introducing Wonder Woman” from All Star Comics #8 (Dec 1941/Jan 1942 but released in October 1941). That tale also introduced the Amazons (Wonder Woman’s race), Steve Trevor (her long-time love interest and friend), and comic versions of the Greek characters Hippolyta, Athena, and Aphrodite. The character got her own solo series only six months later, in Wonder Woman #1 (Summer 1942). A Wonder Woman comic has been in production almost continually since then, through the Golden, Silver, and Bronze Ages of comics, and relaunches/reboots like The New 52 and DC Rebirth.

In these early stories, the Golden Age version of Wonder Woman is created as Princess Diana of Paradise Island. (The “Golden Age of Comics” is the name for the earliest comic books, starting in the late 1930s and lasting for about a decade.) We say “created” because she is sculpted from clay by her mother, Hippolyta, and given life by the gods. Diana is basically good at everything and beats all of the other Amazons in competitions. Hippolyta gives her the name Wonder Woman along with that cool costume. 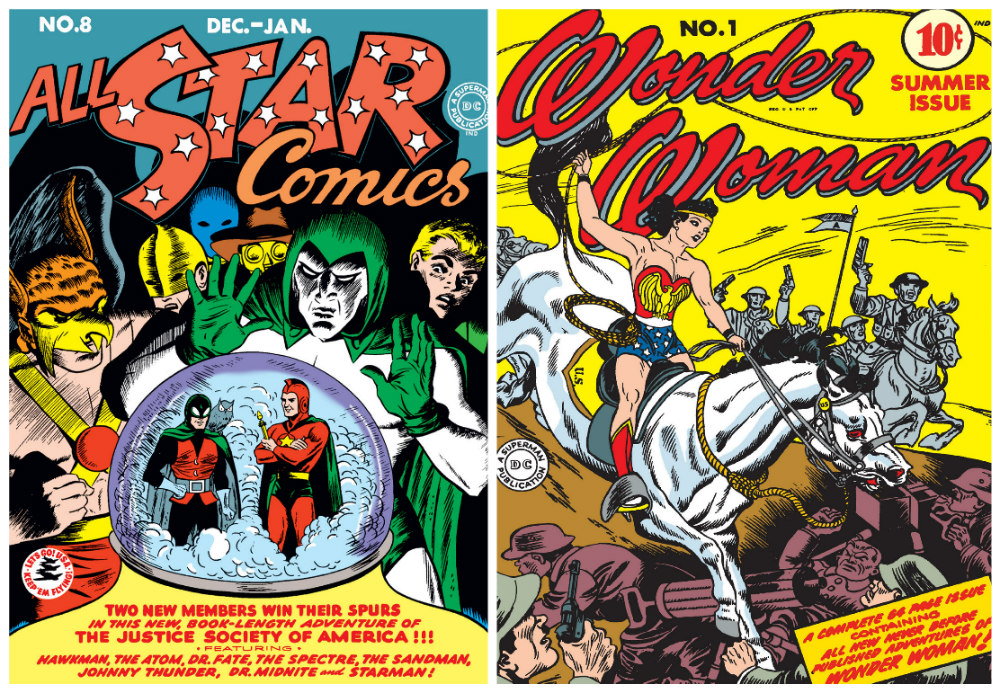 Diana leaves Paradise Island to help Steve Trevor fight the Nazis. Her alter-ego, Diana Prince, is a secretary for the military. Wonder Woman joins the Justice Society of America—sometimes called the Justice Battalion—but also as a secretary. But the JSA won’t even let her fight Nazis with them. (That seems rather ridiculous and sexist, but it’s because Marston was writing Wonder Woman in three other comics and wouldn’t let anyone else write her. Which is…kind of sexist, too, right?) Whatever, she keeps fighting Nazis anyways.

Once World War II is over, Wonder Woman goes back to Paradise Island. Except she totally doesn’t. She keeps working as a superhero, eventually reveals her true identity to Steve Trevor, and the two begin dating. (Well, “courting” because it’s the 1950s.) Eventually they get married and Wonder Woman retires. When the Justice Society of America reforms, Wonder Woman joins them but mostly remains semi-retired until the massive Crisis on Infinite Earths crossover series in 1985. Crisis took the multiple Earths (and associated timelines) of the “DC Multiverse” and greatly simplified them into the “DC Universe”, also called the DCU.

We get the first major reboot/retcon of the character in Wonder Woman #98 (May 1958). That Wonder Woman is born rather than made out of clay. But she’s still good at everything, and in time leaves Paradise Island to save Steve Trevor. Diana co-founds the Silver Age version of the Justice Society of America, the Justice League of America—which probably sounds more familiar to modern audiences. And yes, she actually fights alongside them this time.

Outside of being a superhero, Wonder Woman still goes by the alter-ego of Diana Prince. She runs her own boutique clothing store but eventually gets higher profile jobs, like working at the United Nations and NASA. Diana Prince also marries Steve Trevor in this timeline, but it’s almost immediately brought to an end in that same Crisis on Infinite Earths crossover series.

Wonder Woman gets a reboot starting in Wonder Woman #1 (February 1987, but published in November 1986), the second volume of her solo series. (You may see it referenced like Wonder Woman Volume 2, Number 1.) Queen Hippolyta once again forms Diana out of clay…and she happens to be the first “child” born there in three millennia. Paradise Island also gets a change and is known as Themyscira. But don’t worry, Princess Diana is still excellent at everything and she gets to leave Themyscira to do good out in the rest of the world.

Alas, it wouldn’t last. Wonder Woman gets another reboot in 2011. Starting in Flashpoint #5 (October 2011) and Wonder Woman #1 (November 2011)—we’re up to volume 4 now!—Diana of Themyscira is again the daughter of Queen Hippolyta…and Zeus. Early issues of this Wonder Woman saw her face off against the Greek Gods and associated characters—or at least the DC Comics equivalents of them—and becomes the God of War herself. She joins the Justice League, hooks up with Superman, finds out that didn’t actually happen, and fights some other versions of the Justice League. This version also influenced the Wonder Woman of the DC Extended Universe films, including the death of Superman and the New Gods like Darkseid. 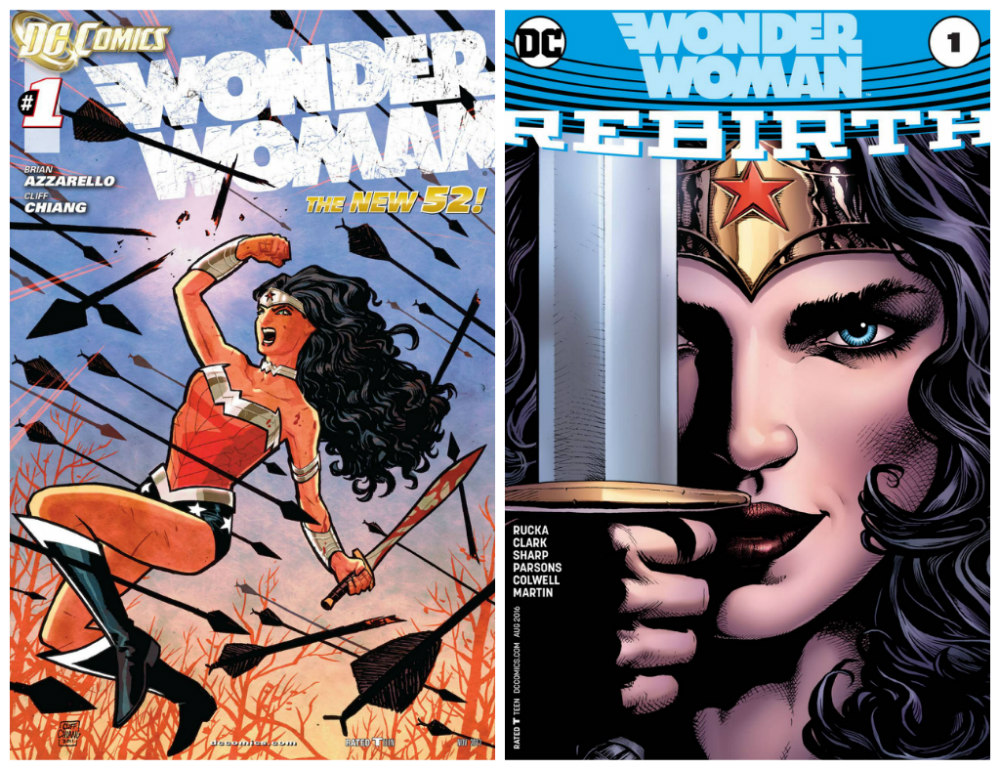 Only five years later, we get another reboot in DC Rebirth. Sort of, because many of the New 52 and DC Rebirth storylines get merged. Now in volume 5, Wonder Woman #1 (August 2016) had a similar appearance to the DC Extended Universe films, along with many other DC Comics superheroes.

Steve Trevor is also back as Diana’s love interest, because they’re now trying to keep the comic characters aligned with their film equivalents, at least as much as possible when it comes to comic book storylines.

And that’s where we leave Wonder Woman for the moment. Wonder Woman 1984 is coming out in a few months, so we'll have to revisit this later. No doubt we'll see plenty more of Wonder Woman!

Did you learn anything new about Wonder Woman? Did we gloss over (or skip) something really important? Let us know in the comments. And if you're a big fan of Wonder Woman, then take a look at these Wonder Woman gifts!