This Back to the Future Q&A Will Make You "Think, McFly!" 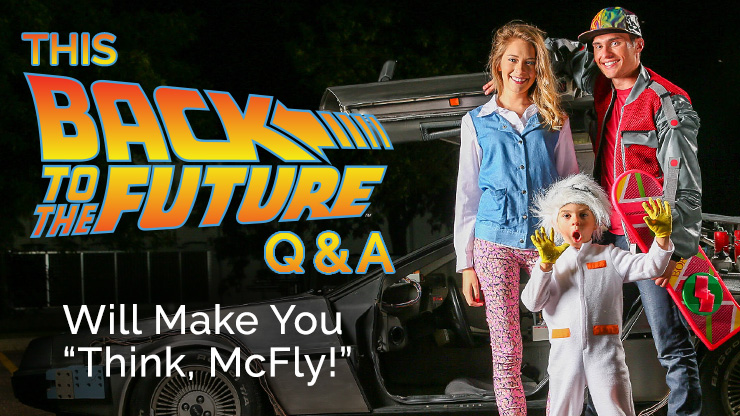 Back to the Future was the highest-grossing film in 1985, spawning two sequels. It was so successful that it got inducted into the National Film Registry. But who would have guessed that this timeless classic movie had its script rejected forty-four times before finally getting it right? We can all agree it was worth it. The only disappointment is that we are past the time when Marty goes in the future and we still have no hoverboards. I want my hoverboard!

Even though the movie was such a success, there are still questions that people have. Like how does that all work? But have no fear, for we went back in time and watched the production of the movies to answer these questions for you. Okay, not really but we did answer a lot of questions people do have about the movie.

Can the DeLorean go back in time?

Yes, the DeLorean is the time machine invented by Dr. Emmett Brown. The first test was with Doc’s dog Einstein who went one minute into the future. Throughout the franchise you will see it go back in time multiple times, starting with 1955 and going as far back as 1885.

Which DeLorean is in Back to the Future?

Doc purchased the DeLorean DMC-12 from a seller in 1984. It was selected as the car to use in the movie because of the gull-wing doors, thinking that it would look futuristic to those in 1955. There were a total of 3 DeLoreans used in filming.

What makes time travel possible in Back to the Future?

The flux capacitor is the core component that makes time travel possible.  It requires 1.21 gigawatts (pronounced "jigowatts" in the movie) of electrical power to operate which is provided by a plutonium-fueled nuclear reactor.

How fast does the DeLorean have to go in Back to the Future?

The DeLorean needs to reach 88 mph in order to time travel. In the third film, we witness Doc and Marty’s dilemma of having the fuel line damaged when an arrow punctures it during Marty’s trip to 1885. Doc is unable to patch it, leaving it unable to reach that speed by itself.

In order to get the DeLorean up to speed, they have a steam locomotive push it past the necessary 88 mph.

When did Doc Brown hit his head?

Doc Brown hits his head on a sink on November 5, 1955. He was standing on a toilet hanging a clock when he fell off and blacks out. When he comes to he has the idea of a flux capacitor and began drawing up the diagram. However, the capacitor wasn’t completed until 1985.

This question is never actually answered in the movie. However, there are many articles that indicate co-writer/producer Bob Gale has said that Marty was told Doc was dangerous and to stay away. Being the teenager he was, he snuck into Doc’s lab where Doc found him there. Doc then gave Marty a part-time job to help with experiments, tend to the lab and the dog. Marty was thrilled because he found all the stuff cool.

What shirt does Marty McFly wear?

In the first movie, Marty McFly wears all kinds of layers. It starts with a red t-shirt, a black and white square print button-down, a jean jacket and red puffer vest. In the second movie, he dons a red shirt with the futuristic jacket. With the third movie set in 1885, he starts out wearing a fringy cowboy button-down shirt. After he gets made fun of he replaces the fringe shirt with a button-down shirt and a poncho.

Did we cover all your questions? If not let us know in the comments which ones you'd like us to answer for you. And if you're like me and want your hoverboard, we may not have one that works but we do have a pretty cool one you can use to look like McFly from Back to the Future. We also carry plenty of Back to the Future gifts!

Tags: Back to the Future, DeLorean, Doc Brown, Marty McFly