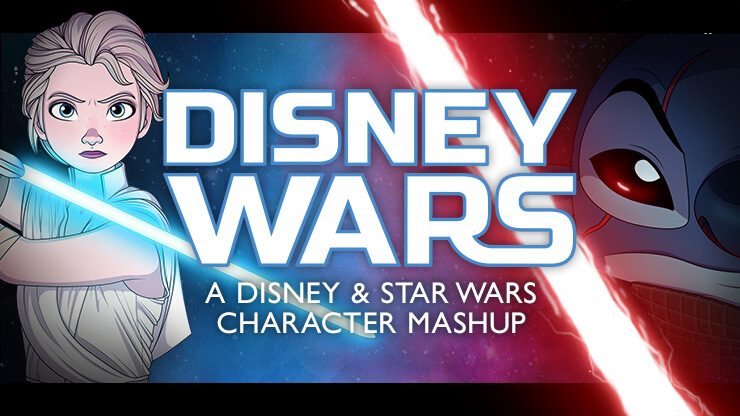 Star Wars has been under the Disney banner for several years now. Of course, this has led to a few interesting questions. Is Princess Leia a Disney Princess? Is a Star Wars and Marvel crossover film going to happen? Can you find Star Wars easter eggs in Disney movies? While these are certainly some interesting ideas to mull over, we decided to take the plunge and turn some of our favorite Disney characters into Star Wars characters from the newest Star Wars movie, The Rise of Skywalker. After all, who doesn't love a pop culture mashup?

While we restricted ourselves to characters from The Rise of Skywalker, we tried to find the best matches from Disney and Pixar movies. We did our best to choose characters that had similar personalities and backgrounds, although others worked well because of their appearance (like Sulley as Chewbacca), or simply because the idea made us smile. Keep reading to see our mashup picks! 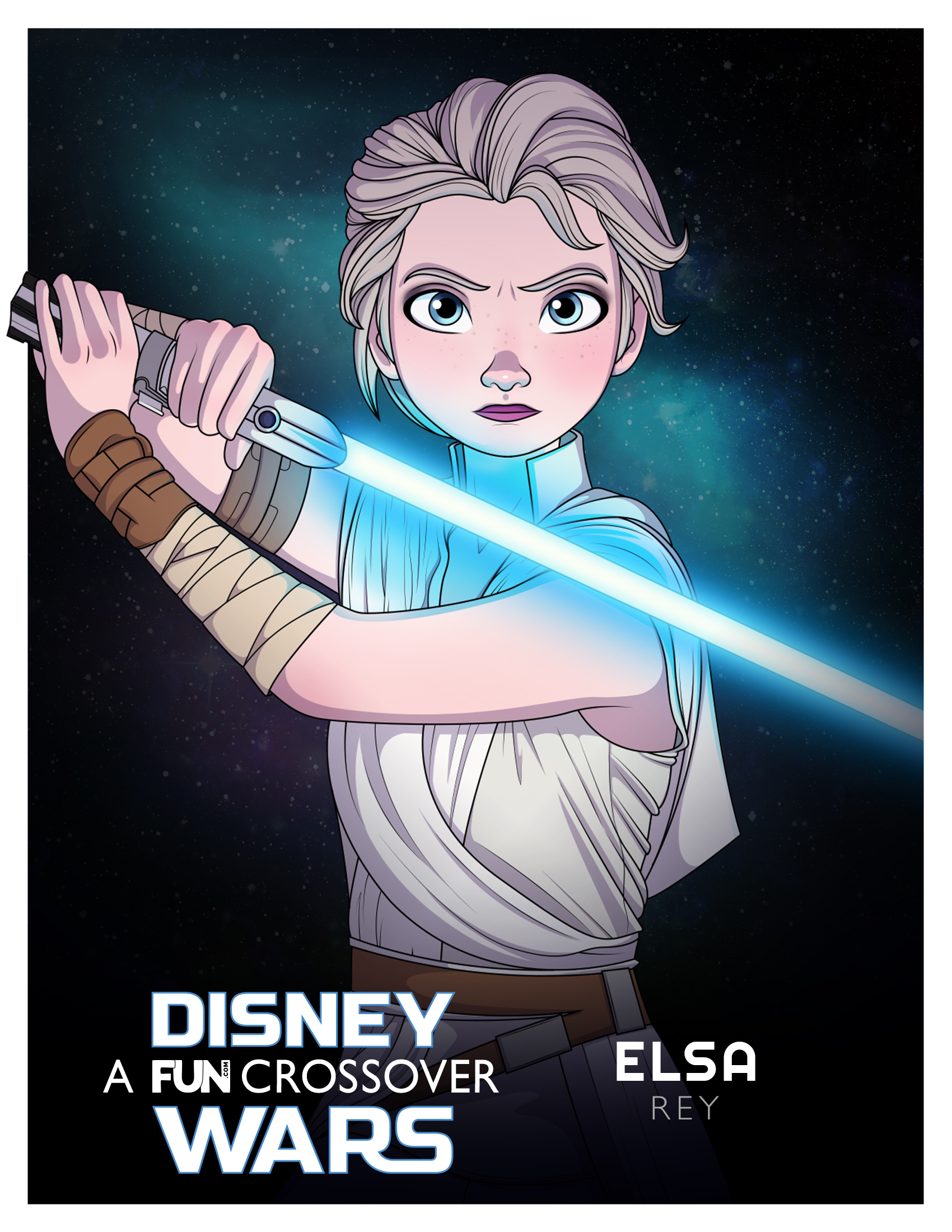 Elsa is searching for answers about the origin of her powers while Rey is also looking for answers to her past. These leading ladies have a tenacity that can't be stopped! 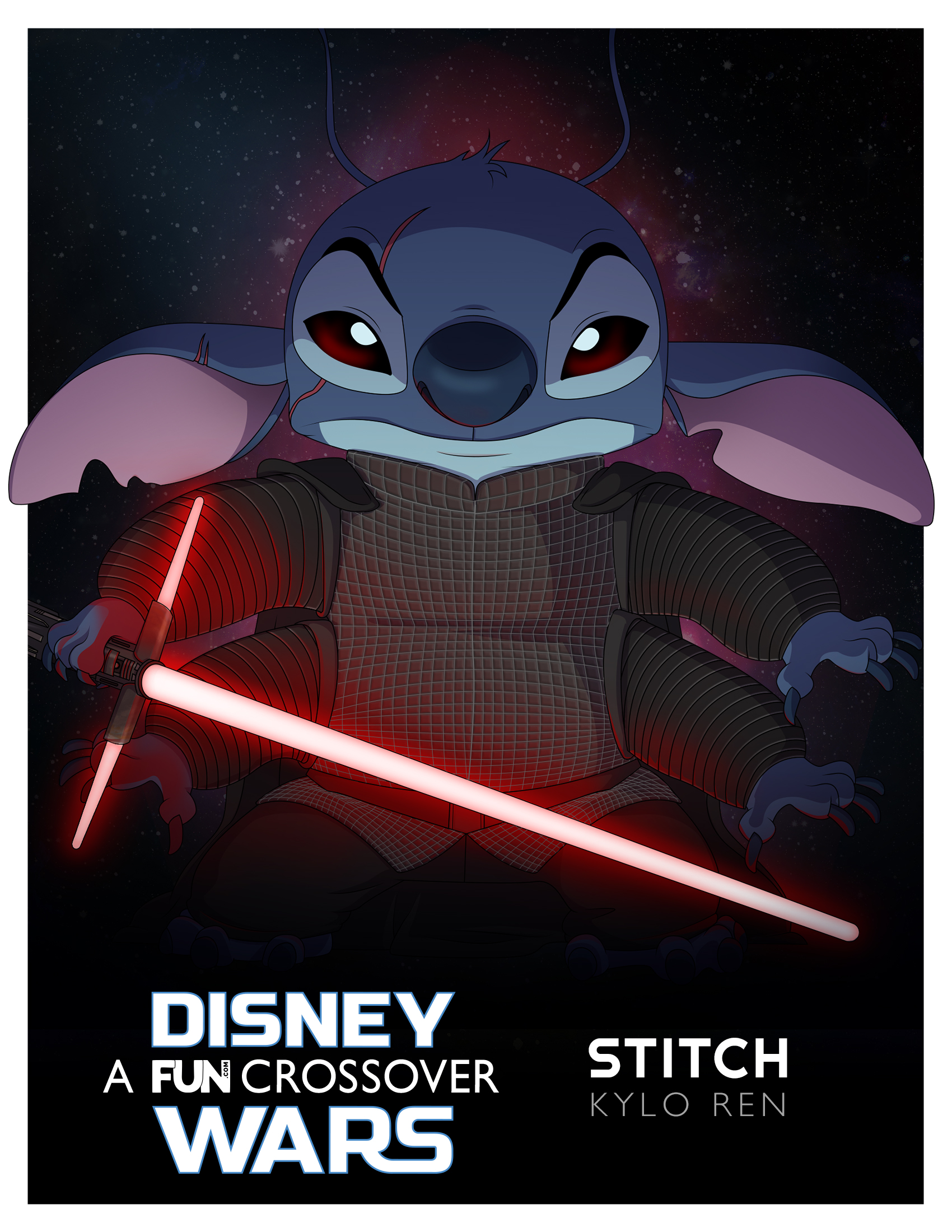 Is he evil or simply misguided? (After all, Stitch managed to find his ohana even though he was made to cause galactic chaos.) Only time will tell for Kylo Ren. 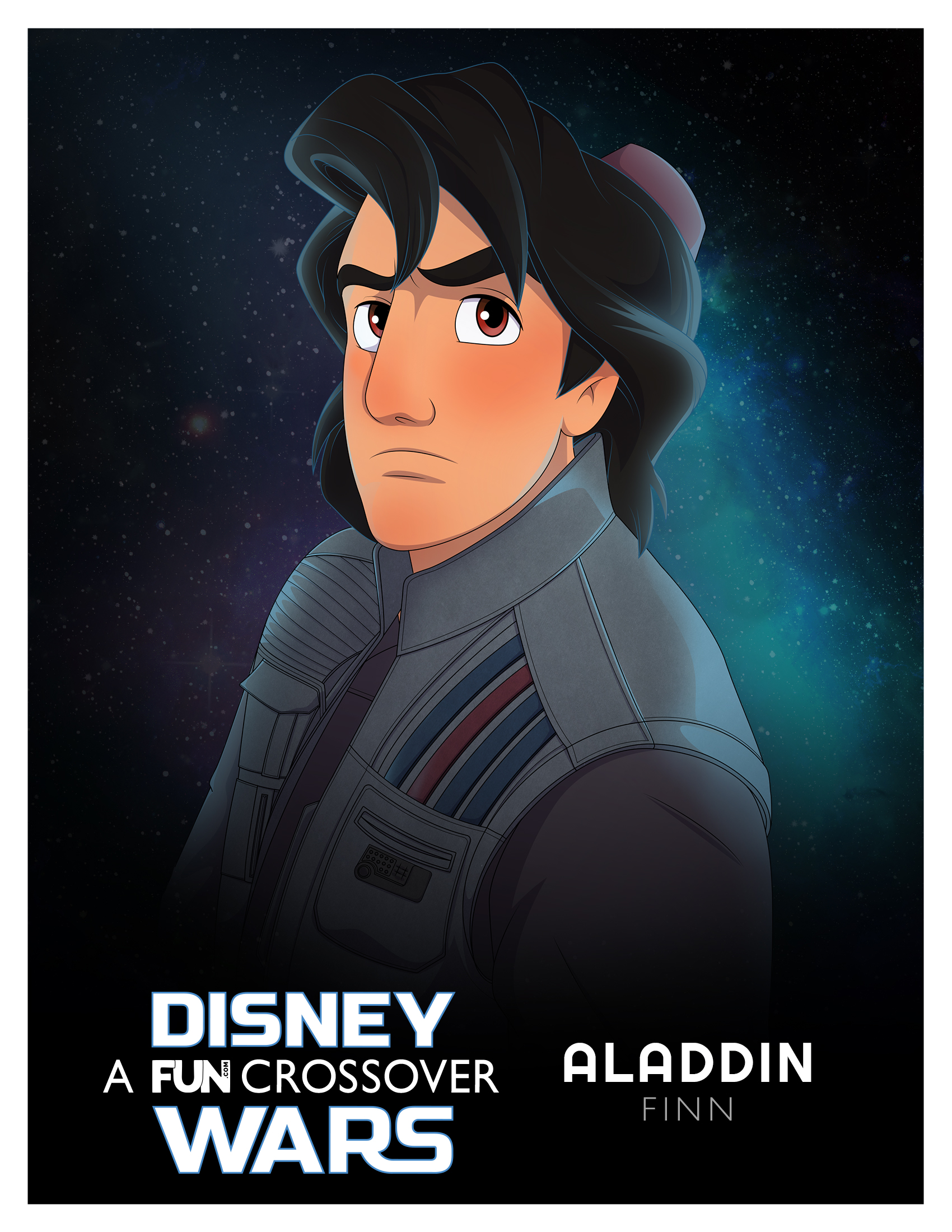 Aladdin changed his life around from being a street rat to a prince. Finn went from being a Stormtrooper to a freedom fighter with the Resistance. (Plus Aladdin and Finn got some nice duds out of the upgrade.) 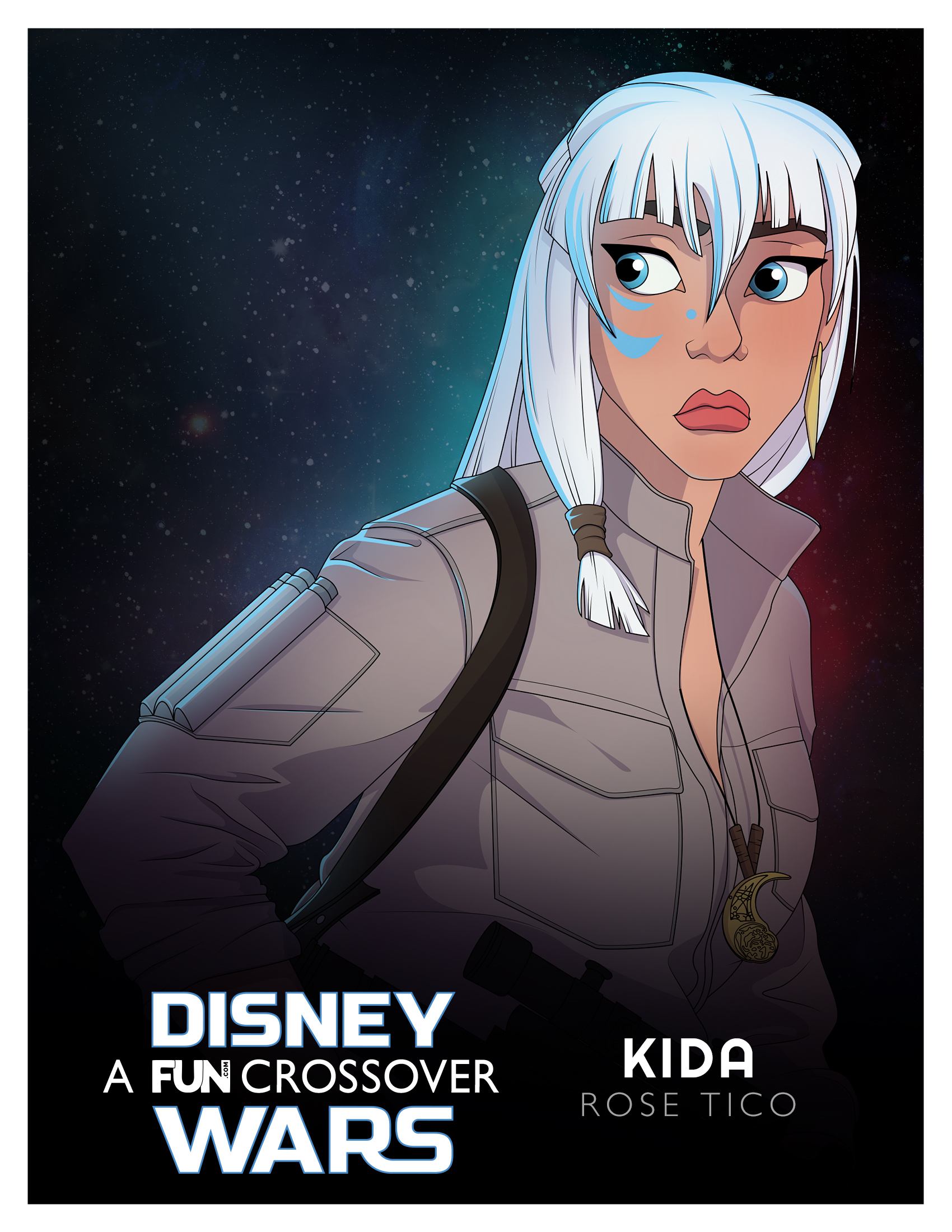 Kida and Rose are both can-do gals who don't give up easily, and they have special necklaces. We're also still waiting for Kida to become an "official" Disney Princess. #WheresKida 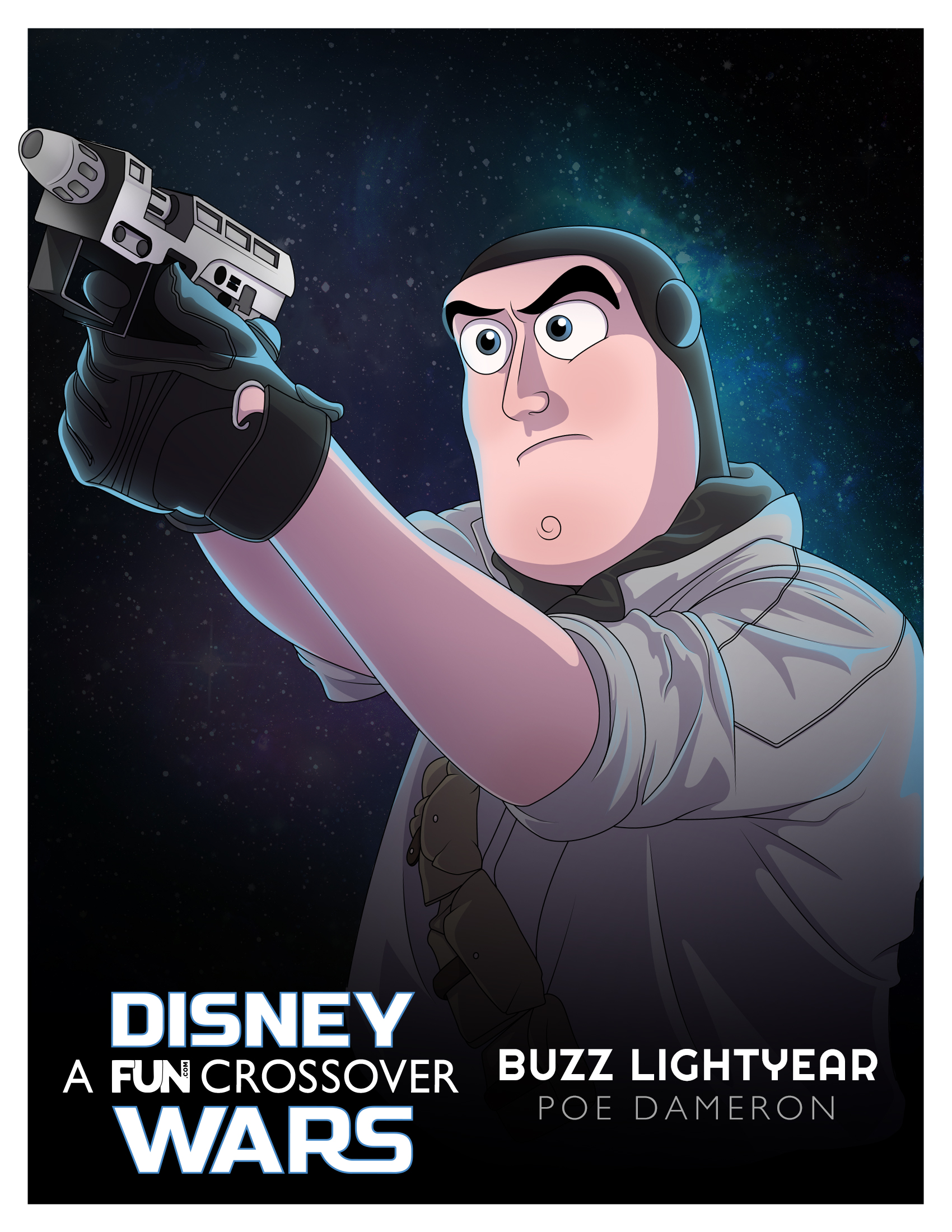 Buzz was a hotshot Space Ranger (before the harsh reality of being a toy set in) and Poe is a hotshot space pilot. They were simply meant to be. 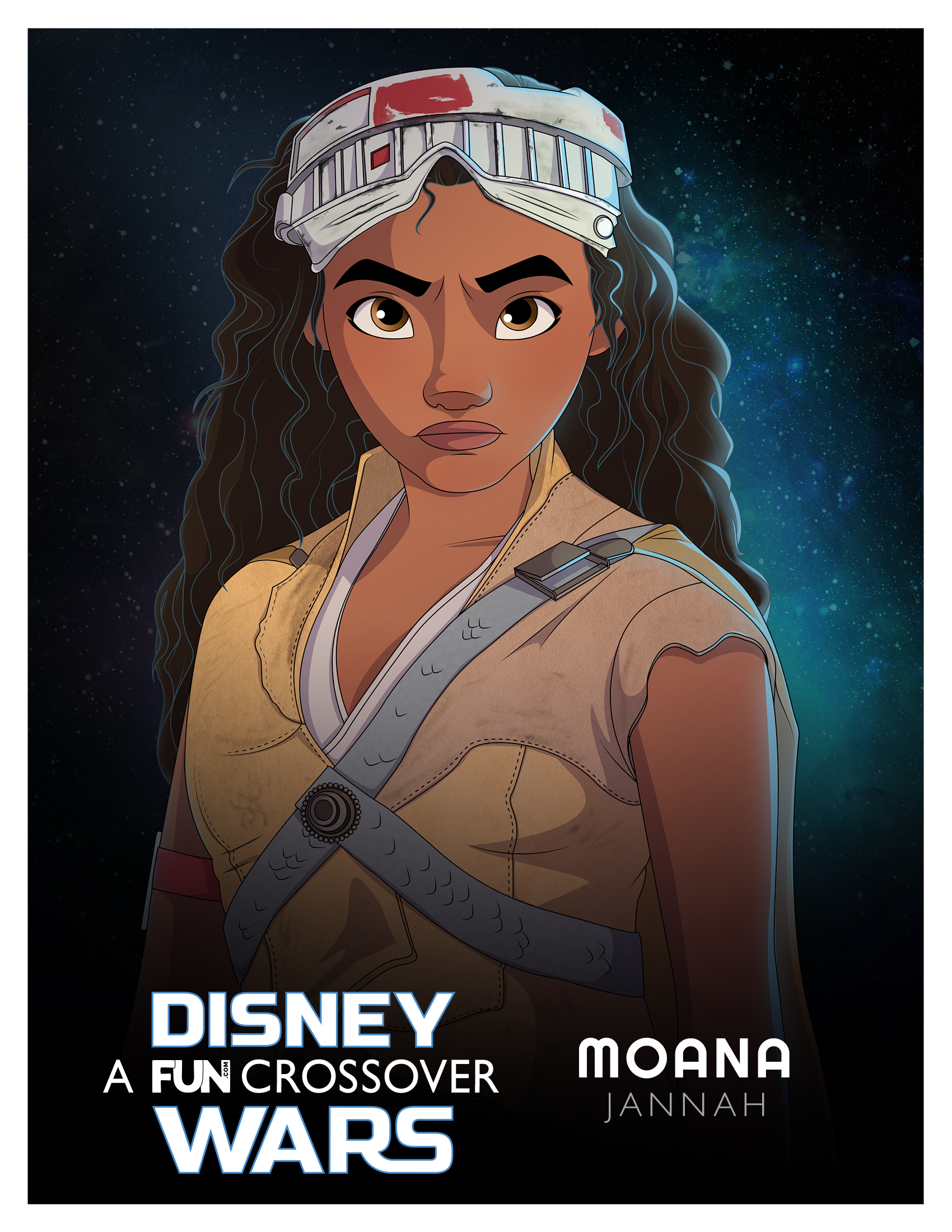 There have been very few pre-movie spoilers about Jannah, but she looks like a fighter! Moana is certainly not a pushover, either, as she managed to wrangle the assistance of an unwilling demigod on her journey. 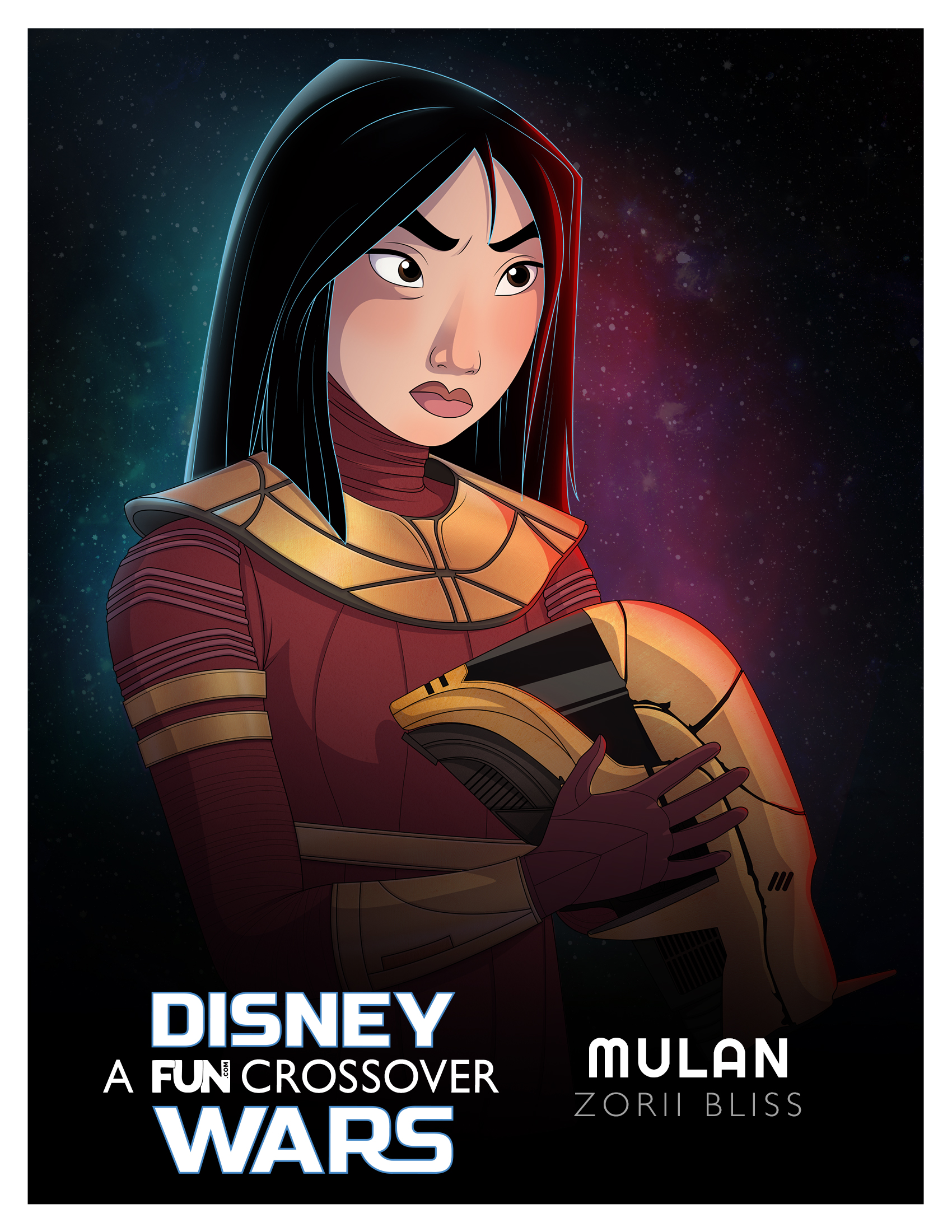 The mysterious Zorii Bliss is one of the newest members of the Resistance. We felt that Mulan would be a great fit as she's also a fighter—one willing to fight for her father and her country. 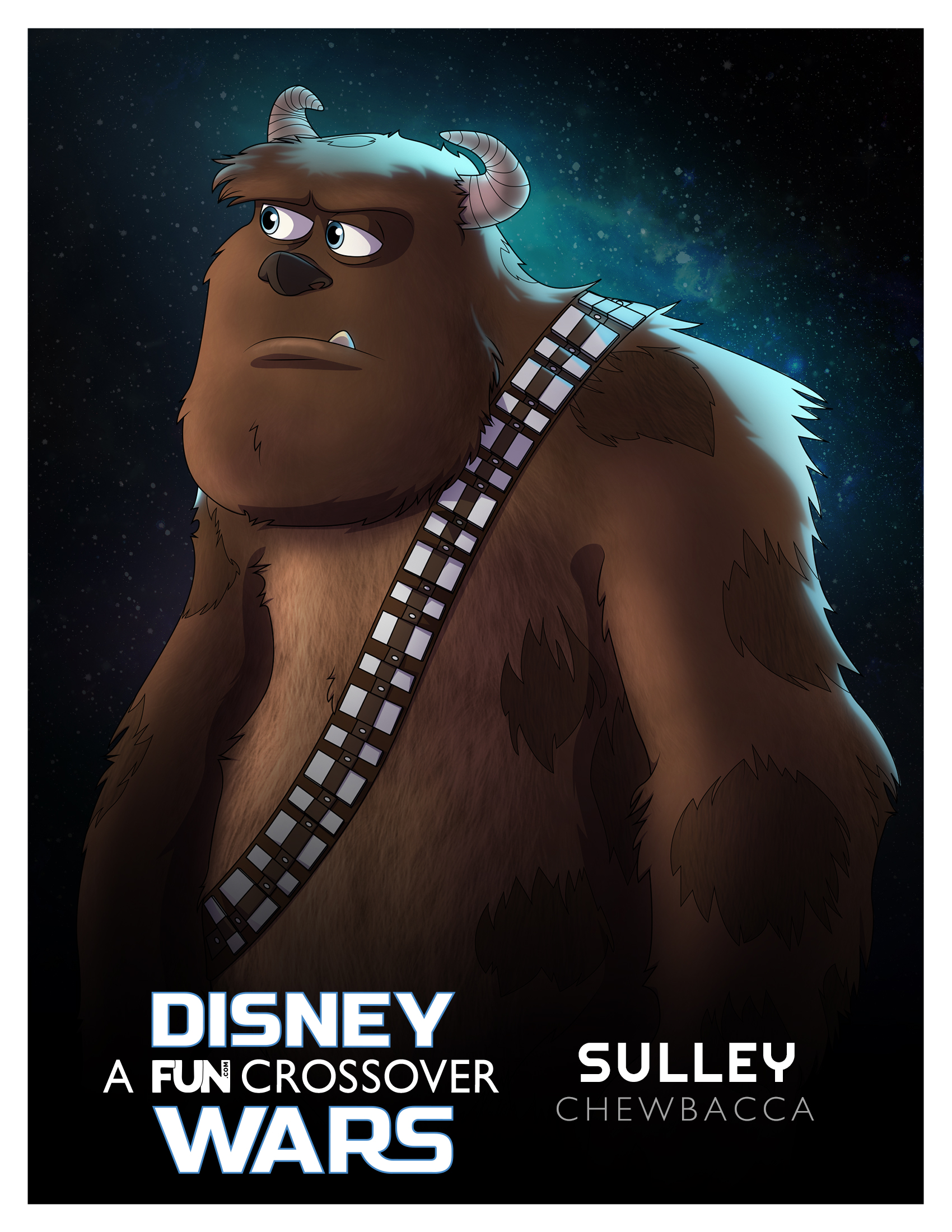 Sulley and Chewbacca are both big, cuddly monsters. Granted, Sulley is probably less likely to pull your arm out of your socket if he loses a game of dejarik. 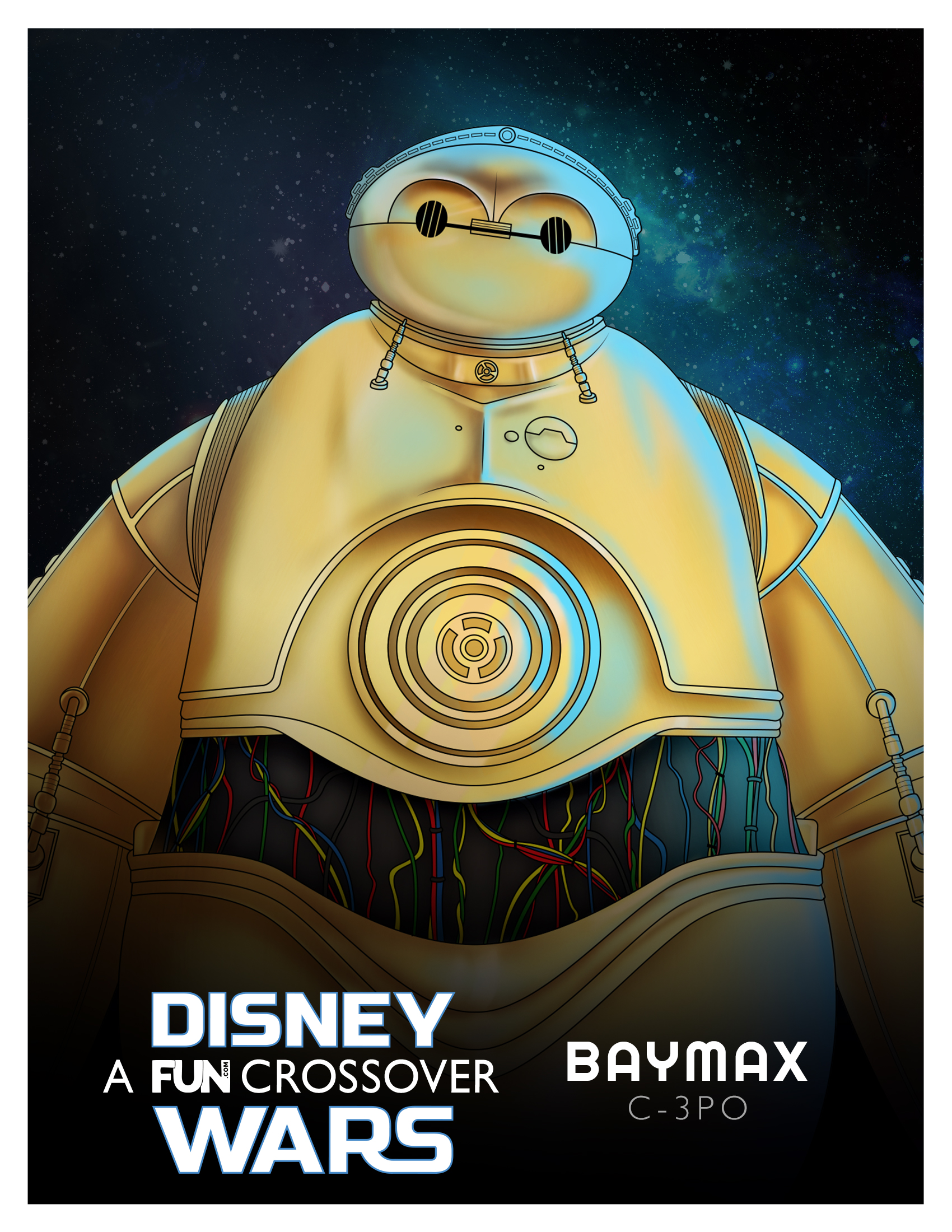 These polite robots were meant for each other. Now Baymax as C-3PO can offer etiquette and health care advice! 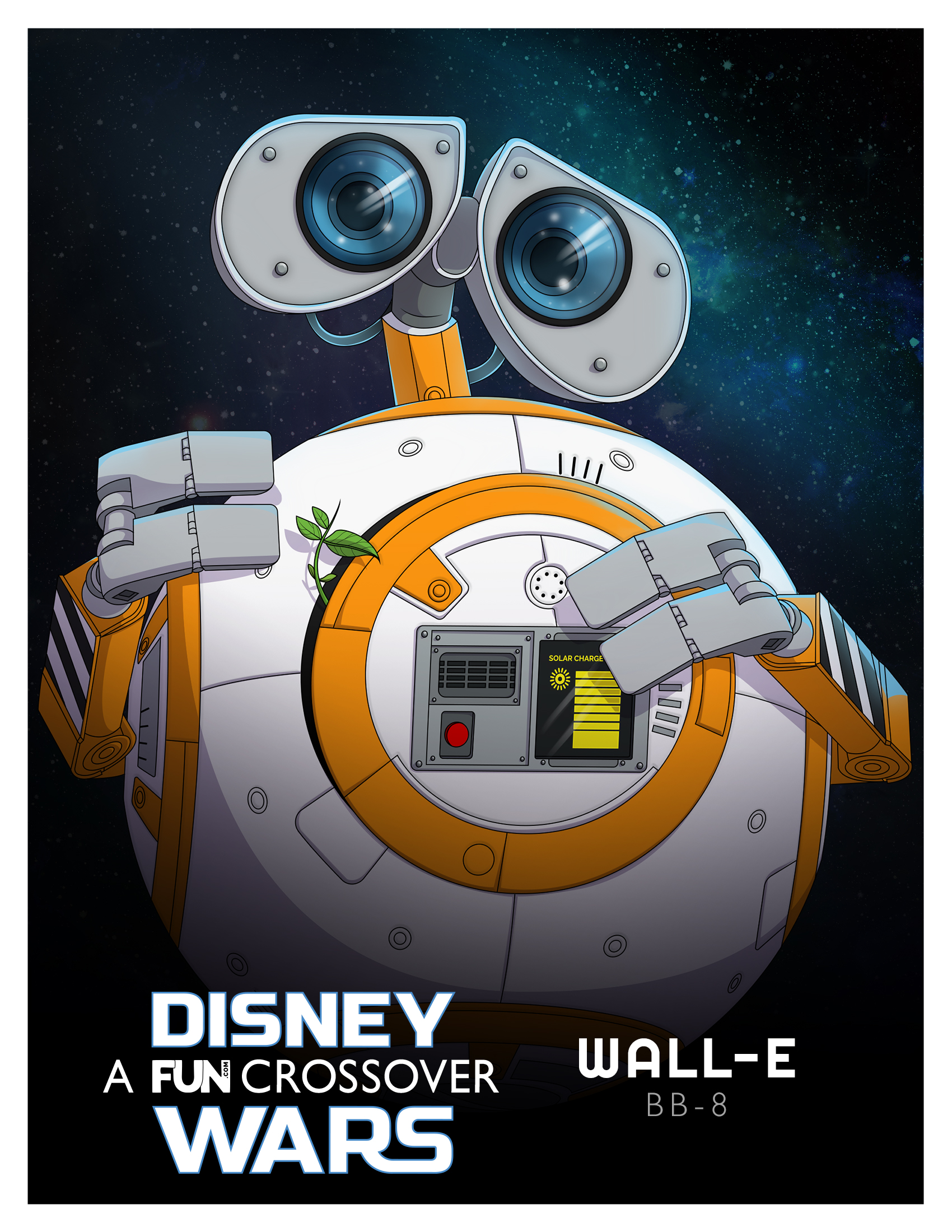 Wall-E and BB-8 are two of the cutest droids in Pixar and Star Wars. We're not sure we have the ability to handle the cuteness of Wall-E as BB-8. 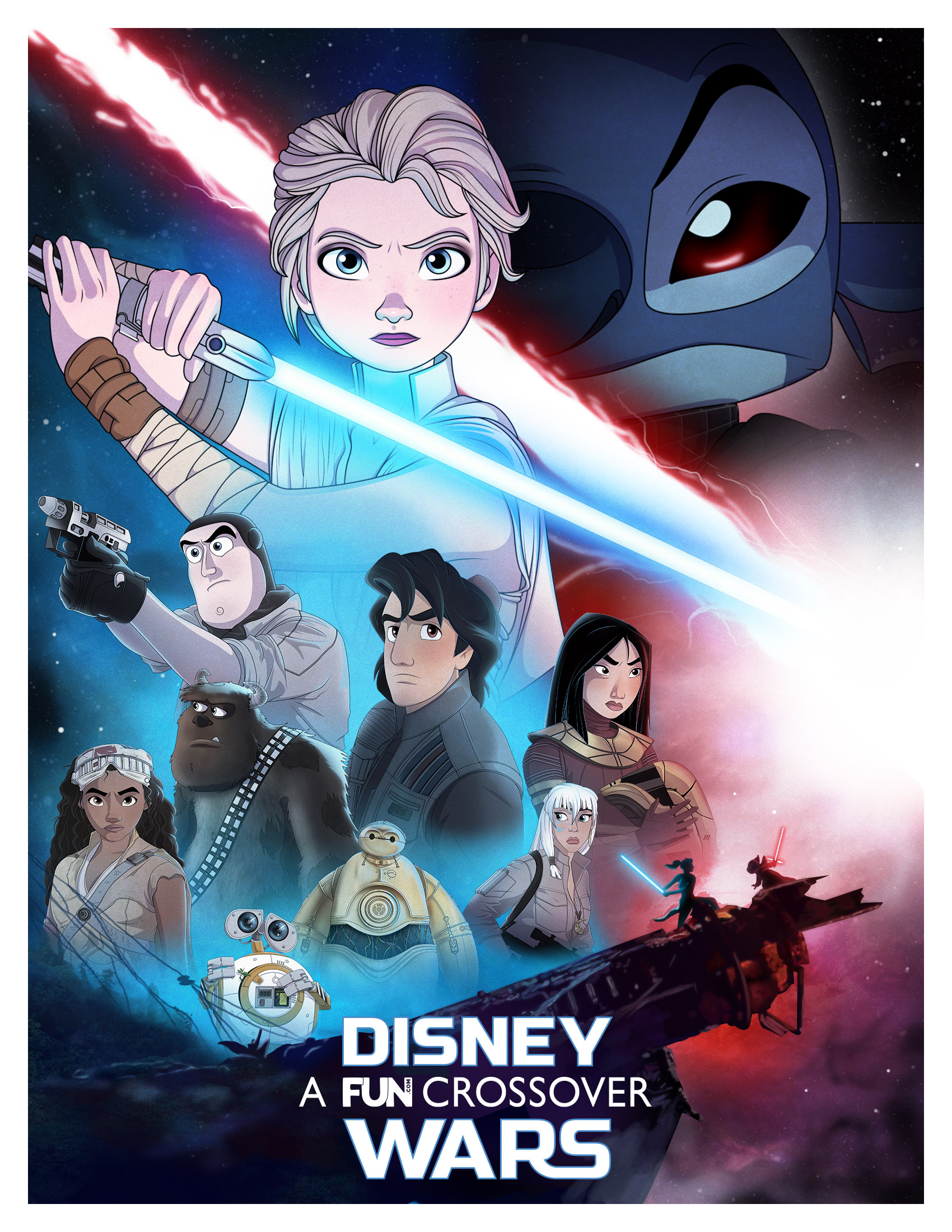 We couldn't let this Star Wars and Disney character mashup skate by without a proper movie poster parody.

We hope you loved our Disney Star Wars mashup ideas! Are you psyched for the next Star Wars movie? Do you have a favorite Star Wars character? Are you planning on handing out some Disney gifts or Star Wars gifts this Christmas? Feel free to let us know in the comments. If you're a fan of character mashups, let us know what you think we should mashup next.

All designs and illustrations by Kady Jaspersen

Kady Jaspersen is the Marketing Graphic Designer at FUN.com, where she designs social media posts, email campaigns, illustrations for infographics, and other web project what-nots.

Out of the office she enjoys coddling her large indoor plant collection and going for walks with her corgi, Oli. You can usually find her doodling or painting, playing video games, jamming to music, or watching a Harry Potter movie (#hufflepuffpride). She is an avid traveler and hopes to see the world!