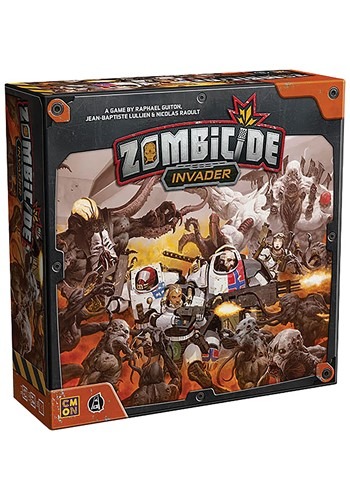 Imagine a world where the zombie menace has grown so severe that the only hope for humanity is to leap among the stars and try to find a chance of survival on space stations in the far reaches! Now, naturally, that provides certain additional obstacles. There's the whole 'humans need to breathe' and 'firearms don't work without combustion' side of things. But, fortunately, there aren't any zombies! Right? ... Riiiight? (Spoiler warning: No, there are definitely zombies.)

If you've played the Zombicide games before, you know the basic rules of this cooperate game of simulated zombie survival, but Zombicide: Invader offers up even more twists to test your tactics. 1-6 players can enjoy 60 minutes of thrilling strategy as you attempt to gather the entire group together to escape a space station that has been invaded by the Xenos—zombie alien abominations hungry for humans! Gather unique equipment cards to help you survive as you move through oxygenated rooms and risk extra threats when moving through airlocks. (Remember: Xenos zombies don't need to breathe!) Watch out for Abominations that spread dread mold that can corrupt your entire station and prevent your evacuation. Use silent weapons to take out the aliens, risk using loud guns and machines to take them out fast, or set sound traps to distract the monsters so you have a chance to get out in this extra-terrestrial version of a game series that truly knows the definition of the zombie horde!

A Zombie and an Alien...

You've heard this joke. About the two of them heading into a space station bar? Well, it turns out that it is one creature and it isn't interested in a simple drink! Take the terrifying rules of Zombicide and add some unbreathable atmosphere in the Invader version of this hit board game.