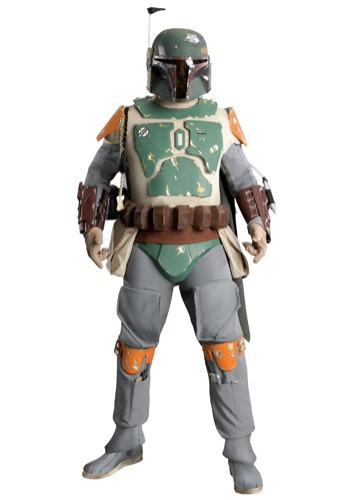 Every bounty hunter needs a suit of armor with an arsenal of hidden weapons, and nothing beats the suits worn by Mandalorian Neo-Crusaders. If this armor was good enough to take down the Jedi of the Old Republic, it should be good enough for tracking down the scum of the Empire, right?

They say the clothes make the man, but you might want to invest in some time at the blaster range if you’re going up against anything stronger than a womp rat. or you’ll be lucky to hit the broad side of a bantha. This XL Ultimate Boba Fett Costume may not have a working flamethrower, jetpack, or toxic saber-darts, but we think you’ll thank us when you try to take it in your carry-on to Comic Con. Remember, “no disintegrations” isn’t just Lord Vader’s preference––it’s the law!

In this costume, you’ll look just the greatest bounty hunter in the galaxy––Boba Fett. Or his dad, if you’re colorblind. How did that armor change color so badly anyway? Did Boba forget about it in the basement and then it flooded? Did he spend a few years wading around a swamp planet? That doesn’t sound too far off the mark, actually. But silver and blue don’t rust into army green and red. Boba must have gotten a paint job at some point. Seems a little weird, right? You wouldn’t have your dad’s classic car repainted in a different color, would you? Well, you might not, but that’s why you’re not the greatest bounty hunter in the galaxy. It takes guts to pilot Slave I from one end of the galaxy to another, tracking fearsome targets for anyone who can pay your fee. The kind of guts where if you want your dad’s armor to be a different color than it is, even if it’s the only memento you have of the man who raised you from test tube until he was cruelly taken from you, you just do it.