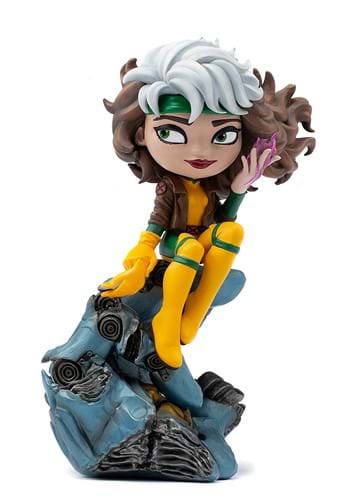 Rogue is a very popular X-Men. Her fame really rose to prominence during the 90s, especially in the X-Men cartoon. How could you now love her? She is a tortured southern belle who made it through a rough upbringing to become a premier team member. As tough as she is, you would think her indomitable will is innate, but it's not. Due to the nature of her life absorption mutant gifts, she can copy the powers of anyone she touches and the memories of said person. This caused Rogue to get mental breakdowns and lose her grasp on reality frequently. Luckily she was eventually able to gain control of her abilities and is now one of the most influential members of the team. She even married her long-time, on-again, off-again boyfriend, Gambit. If you want to celebrate the beautiful mutant with an even better-looking Marvel Collectible, you have to check out this officially licensed Rogue MiniCo X-Men Figure.