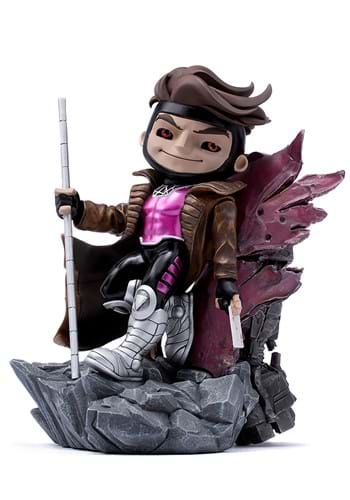 Gambit is a fan-favorite mutant. His popularity rose to prominence when during the X-Men cartoon of the 90s. How could you not like the guy? He's a charming Cajun gentleman. He was also trained in the art of thievery at a young age, so we are sure he took a sweet-talking class or two. Gambit mutant gift is the ability to change potential energy into kinetic energy. For those who don't remember high school science (we wouldn't blame you), potential and kinetic energy are essential concepts in mechanics. The short version is he can blow stuff up. We should have just started with that. He generally likes to blow up small things, like his iconic deck of cards, which he is also very proficient in throwing. This officially licensed Gambit figure shows that he's also not too shabby with a bo-staff either. If you are also a fan of the reformed Cajun criminal, you have to check out our MiniCo X-Men Gambit Figure.