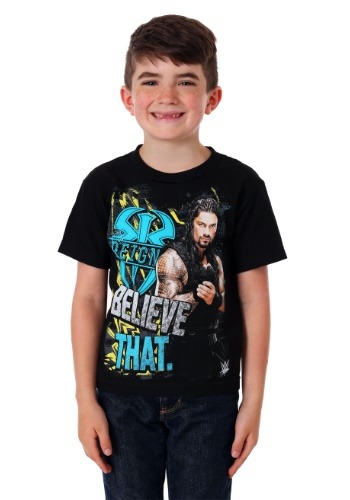 Is your little WWE fan feeling like he could use a bit of inspiration in his life? There's no figure more likely to pump him up than Roman Reigns!

And now, he can wear his affinity for his favorite wrestling champ morning, noon, or night, with this WWE Roman Reigns Believe That Boy's T-Shirt. Roman is tough, sure, but he's also got heart. Sound like anyone you know? Then enjoy watching your little guy get a kick out of this top, from the moment he puts it on to the hours he spends in it, practicing his sweet moves in the living room. He may not be the next member of The Shield, but your child had better believe that this tee will make him a world champion of cool style!

This top is officially licensed by the WWE, so it'll impress even his most die-hard wrestling buddies. It's a classic crew cut with a black background, printed on the front with a bold design. The graphic features Roman Reigns and his famous phrase "Believe That" in bright blue and steely gray hues.

From the school lunchroom to the playground, from wrestling practice to birthday parties, this tee will keep your kiddo in with the WWE-in crowd. You can believe that!