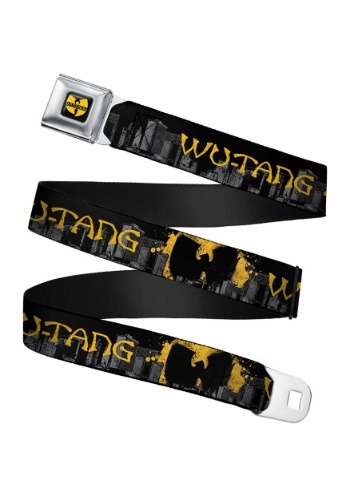 Do you know about Wu-Tang? Of course you do. You could recite every member and every prodigious track that they’ve ever spit on. There’s  Method Man, O.D.B. (rest in peace), Raekwon, the RZA, the GZA, the Ghostface Killah, Inspectah Deck, the Masta Killa, U-God, and Cappadonna. They’re the infamous hip-hop group that ain’t nothin’ to funk with. You know it, but isn’t it about time that you spread the word to the rest of the world. How do you do that? Easy… belts.

When you strap this Wu-Tang Clan seatbelt buckle belt around your waist, everyone will know about the Wu-Tang!

This officially licensed belt is made out of nylon webbing and features a repeating Wu-Tang symbol pattern on the exterior. It also has the New York City skyline as a backdrop. The adjustable belt clips into the seatbelt-style buckle, which also has a Wu-Tang symbol on it. The belt is made in the U.S.A.

Strap this bad boy around your waist and you’ll be representin’ for the greatest rap group in the history of hip-hop. It makes a great gift for any hip-hop head or you can just give yourself the gift of Wu-Tang.