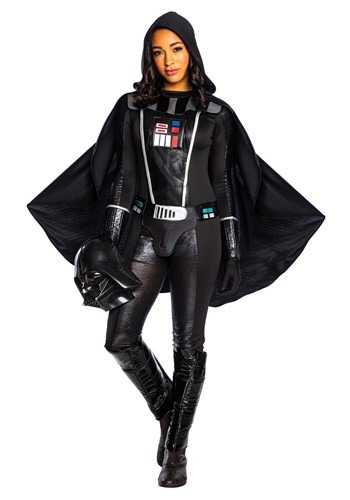 Darth Vader blew it. During the huge battle at the end of Star Wars: Return of the Jedi, he could have finished Luke off and sealed victory for the Empire. Instead, he decided to toss Emperor Palpatine down a giant chute, ending both his and Palpatine's career as super-bad-guys. Sure, he completed the redemption arc and was able to return to his light-side roots... but we sort of wanted to see him continue his reign of evil over the galaxy far, far away.

Well, now's your opportunity! Perhaps you can take on the title of most infamous Sith Lord the galaxy has ever seen! All you need is a villainous outfit and a mastery over the Dark Side of the Force. We'll help you with the outfit if you start training in the ways of the Dark Side.

This Star Wars Darth Vader Costume for women is a brand new spin on the classic villain from the original trilogy. It starts with a black jumpsuit that has embroidered details on the front to make it look like Darth Vader's signature outfit. The suit has a zipper closure, belt loops around the waist, and a fastener along the collar for fitting. The belt is designed to look like Vader's belt, with plenty of embroidered details. The boot covers fit with elastic bands and can be worn with most pairs of shoes. The cap attaches to the collar of the suit and the molded Darth Vader mask fits over your face with a simple elastic band. The black gloves put the true finishing touch to the look!

When it's your turn to finish off Luke Skywalker once and for all, we trust you'll do the right thing and help ensure the reign of the Empire for many years to come!