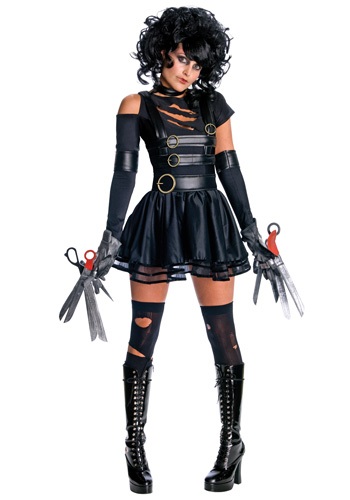 When it comes to individuals with scissors for hands we have a few questions. Like, how do they put their make up on without rearranging their entire face? Or, what does the bed look like after they make it? Is it still in one piece? And, how do they go to the bathroom? Well, thankfully you won’t need to worry about any of those basic, daily activities becoming any more difficult with this Miss Scissorhands Costume.

Once you toss on this officially licensed ensemble, you’ll look like Edward’s true soul mate and be ready to hit up the party scene this Halloween. No need to worry about any of your dance moves causing any serious bodily harm. You may have scissors for hands but they’ll just be made of foam, and they’re only attached to gloves, not to your actual hands. So whenever a task calls for regular hands or a creepy pair of scissorhands, you’ll be ready to go!

The black dress has slits along the chest and a vinyl belts at the torso. The petticoat is attached to the skirt. With the help of Hook and Loop fastener, the PVC belt attaches perfectly around the waist. As mentioned earlier, the gloves with the attached gray and red foam scissors are included with the outfit. A single half-sleeve fits on the short-sleeved arm and a messy black wig with a mesh cap interior will complete your transformation.

New Spin on an Old Favorite

Want to look like you walked right out of a Tim Burton film this Halloween? Toss on this Miss Scissorhands Costume and your dreams will come true. You’ll look like the perfect mixture of creepy and cute, like a living embodiment of gothic elegance. So let your freak flag fly high this year when you hit the streets in this spunky ensemble!