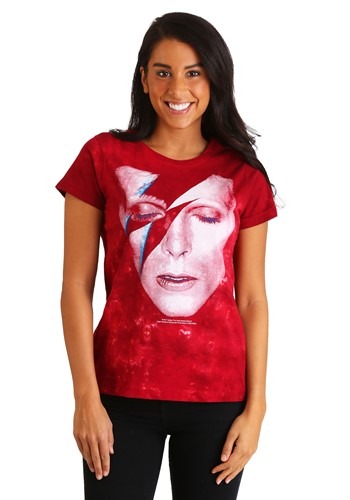 Tales of the Man Split in Two

David Bowie's album titled "Aladdin Sane" represented his first works as a rock star, ultimately successful in the United States. But "Aladdin Sane," came from the wordplay of A Lad Insane, which spoke to Bowie's love-hate relationship with America.

The album cover with a colorful lightning bolt across Bowie's face, eyes closed, and head bowed slightly downward earned a place among rock's most iconic works of art. It's been labeled the Mona Lisa of album covers. Bowie was the ultimate rock shapeshifter, but this t-shirt photograph remains this most personal among his fans.

Bowie's split feelings about America finally found closure in the song "Young Americans." But it was the hard rocking beats and infusion of jazz, cabaret and pop in "Aladdin Sane" that made Bowie one of the most influential musicians in both the 20th and 21st centuries, which creates a reason why wearing this t-shirt so compelling.

The Elegant, Avant-garde Side of Hard Rock

In the 70s, it was rare to find a musician or a favorite group willing to take the creative risks and abandon the orthodoxy of popular music, that is until David Bowie became a star.