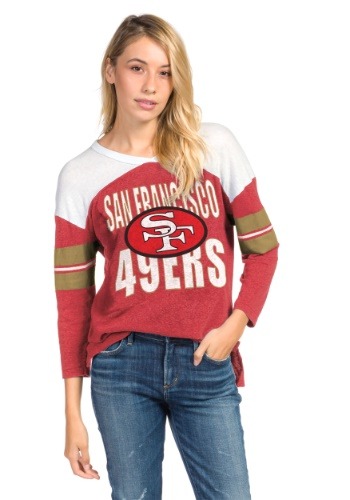 In 1968, the 49ers introduced a new logo with the letter S overlapping the F and both letters centered on an oval background. The new logo made its appearance during the time of peace, love and professional football. Soon, Monday Night Football arrived and increased NFL exposure to a broader audience.

The 49ers team-design drum rolled the era of Bill Walsh and Joe Montana when the 49ers went to three Superbowls. The coach's and quarterback's legendary statuses were affirmed in NFL history. For 49ers fans, looking in retrospect is rewarding. Wearing this throwback tee satisfying.

Ask about the West Coast Offense, and what comes to mind for fans is the 49ers logo as it appeared when the team became a force with which to be reckoned. In line with the old-school style, this is a v-neck tee with almost a team-uniform, shoulder-pad design that will look perfect on today's women 49ers fans.

Loyal Fans are in San Fran

As a 49ers fan, you can make this your first team apparel choice or add it on to your collection. Look your best in vintage scarlet red and gold, moving forward or looking back!