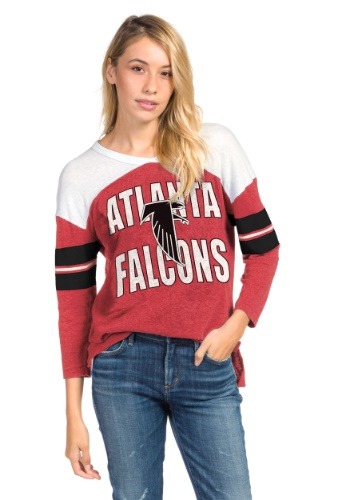 At first, there was a bit of a struggle about an Atlanta professional football team. Both the NFL and AFL made plays for a franchise for the city before football games were played on the field. The NFL won out, and the team was born in 1965, and almost a year later, the NFL and AFL merged.

Several folks suggested "Falcons" but high-school teacher Julia Elliott took this same suggestion one step further, and in her words said: "The Falcon is proud and dignified, with great courage and fight. It never drops its prey. It is deadly and has a great sporting tradition." So, Atlanta's professional football traditions began. The team's brand took flight.

Eventually, the Atlanta Falcons updated their falcon logo. But the original logo brings back for many fans memories of the team's early struggles and victories. This 3/4 length sleeve t-shirt echoes the fledgling look-and-feel of the Atlanta Falcons.

Mention team nicknames like The Dirty Birds and nostalgic feelings resurface from fans who had the fan experience or who heard the stories. Honor this nostalgia by wearing this t-shirt to the stadium or when out with friends.