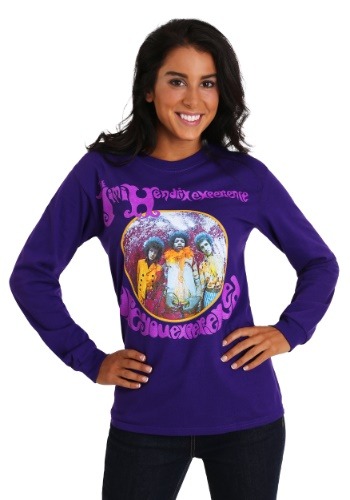 Are you experienced? In 1967, singer, guitarist, and songwriter Jimi Hendrix played alongside bassist Noel Redding and drummer Mitch Mitchell and released the "Are you experienced?" album. The group released 3 other studio albums and swept up the music industry with their influential sound of hard and psychedelic rock. The Experienced trio recorded several hit singles including " Hey Joe," "Purple Haze," and " Along the Watchtower." Only lasting 3 years, the group eventually split with Redding quitting the group heading back to England. Now that you know the deal, you can pay tribute to your favorite rock and roll band and one of the 500 greatest albums of all time with this Womens Jimi Hendrix Long Sleeve Purple T-Shirt.

This rad 100% cotton shirt is as purple as the number one hit " Purple Haze." The officially licensed image of " The Jimi Hendrix Experience" album cover is featured on the front. In neon, purple writing is written " Jimi Hendrix Experience" and " are you experienced." The cover photo and design was shot by Karl Ferris. Hendrix loved Ferris's psychedelic shots and personally asked him to create the image for the album. The photo featured on this shirt represents not only an era of amazing music and talent, but artwork and expression as well. Jimi is featured wearing his famous jacket with psychedelic swirls and double-pupil eyes on the chest. The photograph for the album was shot in the Kew Gardens.

When you put on this Women's Jimi Hendrix Long Sleeve Purple T-Shirt, you can almost hear Hendrix himself singing to you " "Now-a I see you come down on the scene, oh Foxy. You've got to be all mine, all mine. Ooh, foxy lady."