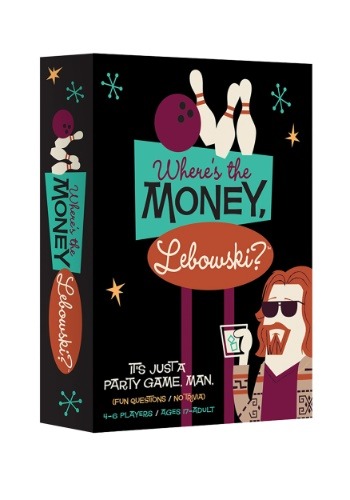 You have to admit it. German nihilist terrorists, a Pomeranian, bowling, guns, plenty of Creedence Clearwater Revival songs, Sam Elliott, and a rug that tied the whole room together—The Big Lebowski really had it all. Why can’t everything have it all like that? The world would be a much more interesting place. Can you imagine Sam Elliott showing up at your local bowling alley with a boombox in his hands… and it’s playing Run Through the Jungle by CCR?

Well, this game doesn’t have that, but it does have some wacky questions based on the Coen Brothers movie. The Where’s the Money, Lebowski Party Game. The game comes with tons of cards, including big question cards, abide cards, and money cards. The game plays 4 to 6 players and requires you to ask and answer some loaded questions. Some of the questions are definitely adult themed, so this is a game to play once you’ve put the kids to bed!

Don’t know that much about The Big Lebowski? No worries! This game doesn’t involve trivia knowledge and even those that have never seen the movie can have a ton of fun with this crazy party game.