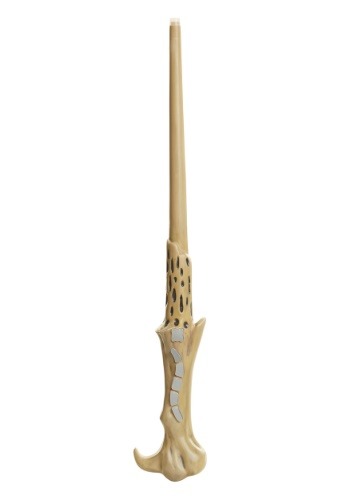 YEW AND A PHOENIX FEATHER CORE

What makes a wand?  What makes a wizard?  These questions are at the core of the Wizarding World.  Simply put, the more magical the stuff, the greater the potential, but there are plenty of other ways to define strength when it comes to magic!

If you're looking to prove yourself as the mightiest of wizards, you must first be accepted by a wand that has enough power to provide what you're looking for.  In the case of Harry Potter and Tom Riddle, it would be two halves of the same make:  a wand with a phoenix core!

Feel the glorious thrum of magic when you hold this replica of the Harry Potter film series in your hand.  Know that you hold the Wand of Voldemort!  With the same boney look as we saw in the films, this wand has the hooked end suggested by the producers and the mottled look of a wand used for the worst of evil curses!

A WAND OF CURSES

Magic must be used responsibly and that is extra true when you're holding a wand with a history like the one of Tom Riddle!  Who knew precisely what came of Voldemort's Wand, but now you can tell the story of what happens next!