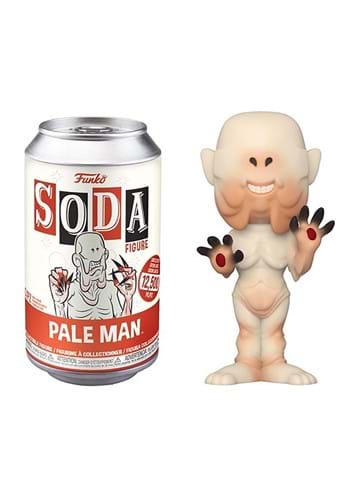 This Monster Is Hangry Too

It’s been a long quest, and your stomach is growling relentlessly. You quietly sneak the dagger out of its hiding place and turn to slip away, but that banquet table looks too inviting. The fairies whisper, warning you to leave, but you can’t help it. Almost involuntarily, your feet carry you to the table and your hand reaches out. It finds a tempting soda can, you pull the pop-top and – yikes! What kind of creature is that? Better run before it puts its freaky eyeballs into its hands and eats you!

No need to worry about this Vinyl SODA Pale Man! This officially licensed Pan’s Labyrinth model will sit happily on display instead of chasing you around a hall in the hopes of catching a nice human appetizer. You’ll receive either a grinning version of the creepy monster or the limited-edition chase that depicts him with his eyeball-loaded hands lifted to his face. It’s the luck of the draw- much like going on a quest!