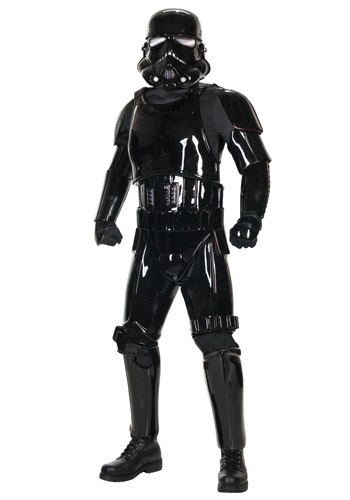 Are you tired of seeing the Rebel Alliance make fools of the Empire every step of the way? First, there was the whole Death Star fiasco. The whole thing exploded because a farm boy shot a tiny spot in an exhaust port. Gosh, then there was the Hoth battle. Sure, it ended in victory, but all the major important Rebel figures like Leia Organa and Luke Skywalker safely escaped the battle with nary a scratch. Then, the Millennium Falcon slips through their fingers without a trace! That’s ludicrous! What’s next? Is the Empire going to suffer a crushing defeat at the hands of a pack of teddy bears on some rinky-dink moon?

Well, it’s time to put a stop to it! It’s time to suit up and show the Rebel Alliance the power of the Empire. It’s time for you to join the Galactic Empire’s elite forces with this Supreme Edition Shadow Trooper costume.

This officially licensed Star Wars costume is a based on the covert ops Stormtroopers, clad completely in black armor. It comes with a black zip-up jumpsuit made out of polyester. Molded black armor pieces fit around your chest, back, shoulder, hips and belt. It also comes with a pair of jet black gloves to match the suit. Of course, the finishing touch to the costume is the collector’s edition mask, which perfectly recreates the Stormtrooper mask in a pitch black color. It also makes for a great display piece for your collection!