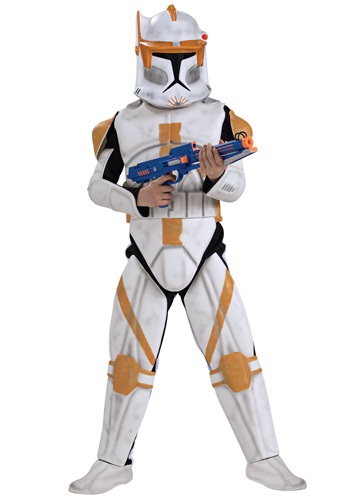 When it comes time to save the galaxy, there's only one group of troopers that's ready to be called on. You guessed it, Clone Troopers! Face it, every now and again, there's a pretty good reason to give these guys a call. Whether it's a delicate trade embargo or an army of battle droids mounting an insurrection, well, then Clone Troopers have what it takes to get the job done. And when it comes to all the soldiers in their army, there's one trooper that stands above the rest. You guessed it, Commander Cody.

This Kid's Ultimate Commander Cody Costume will give any little guy or gal the style to be dressed up just like this famous Clone Commander! Cody was a loyal soldier and so good at his job that he even became a Marshal Commander thanks to Obi-Wan Kenobi. When your kid is at the helm of the Star Wars adventure as Cody, we're sure they will be a very capable solider! This costume set comes with everything needed for the fun. A polyester jumpsuit features attached polyfoam armor pieces, fully printed for extra costume effect. This ensemble also comes with a 2 piece helmet and a belt for the full effect. The blaster accessory is sold separately, but with or without it, we're sure your child will have a blast suiting up as this Star Wars hero!