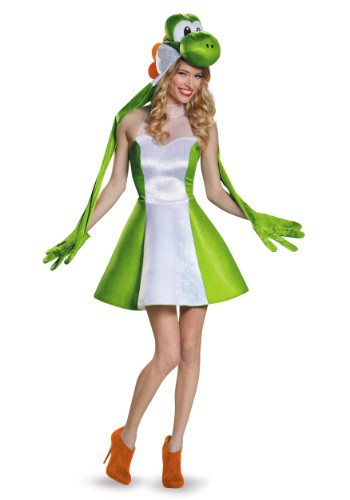 We know that Mario is the star of the show (or should we say video game?) That mustache-sporting super-plumber is the central character, all the games mention his name in the title, he gets all the recognition for saving Princess Peach, he is gifted with a wide-range of powers, and blah blah blah blah blah. Yeah, we get it; Mario is awesome. But you know who is also awesome? Yoshi! And to be completely honest, we are sick and tired of the lovable green dino not getting the attention he deserves.

Why should Mario gain all the popularity among Nintendo fans? Yoshi is just as cute, likable, and has some pretty good powers too. Can we all take a moment to reminisce over Yoshi's spectacular abilities? He can spontaneously lay eggs after gobbling down other animals or fruits, and that's epic. Plus, he can also use those speckled eggs as projectile weapons, and that's even more epic!

It's about time that Yoshi gets the attention he's rightly owed. Prove to everyone that Yoshi needs a chance to be in the spotlight once you're wearing this tween Yoshi skirt costume. The sleeveless dress fastens with Hook and Loop fastener and the skirt is backed with foam, giving it a flared shape. The character hood has a soft-sculpted snout "wings" that double as gloves. We wouldn't recommend launching eggs at your foes, but if you're in the mood...what the heck! You'll have Yoshi's approval.