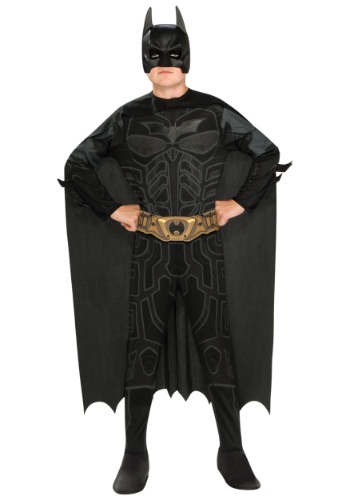 He's on patrol in the city. But he's not any regular city, and he's definitely not any regular dude. Because he's Batman, and he's here to save the day! Okay, okay, he's not Batman yet, but he's about to be. When you hook him up with this Dark Knight Rises Movie Costume. It's so Bat-tastic that we're sure he'll be battling villains like Bane in no time!

He might have his sights set on driving the Batmobile, or maybe he just wants to save the city. Whatever kind of adventure he'd like to undertake as the Dark Knight, he'll be up for the action in this intense costume. With a jumpsuit, cape, mask, and belt, it has everything he needs to play the part. The entire suit has gray screen-printed details to resemble the movie costume, and when he puts on the mask his real identity will be safe and secure. With the cape, belt, and built-in bootcovers, he'll have the head-to-toe look ready to roll!

This costume comes to us from Rubies Costume Company, and it's officially licensed from The Dark Knight Rises. Let your tween/teen do his best Christian Bale impression, and he'll be ready to do his part to save the city. Now that sounds like FUN to us!