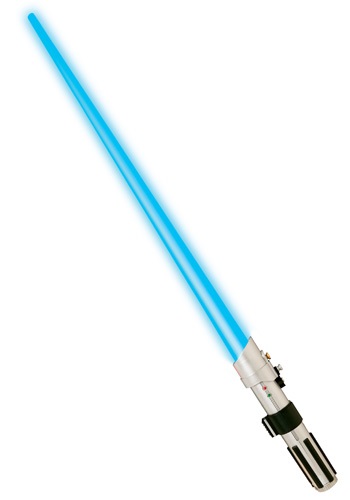 Every legendary tale out there has that special something that sparks our sense of adventure… that makes our skin tingle with anticipation. It might be the hero’s quest and our vicarious excitement as they push beyond that seemingly unconquerable obstacle and stand up against the darkness even though they fear that they will fail. It might be the daring smile that they flash at those they’ve saved just before heading back into the fray. But, beyond just the hero itself, each of these tales always seem to have an artifact that practically tells the whole story, too.The One Ring. Excalibur. The bull whip and explorer’s hat. The magic lamp. Even without saying too much, we all recognize which story they come from.

So, if you are going to set out in an effort to stop the insidiously growing strength of the Sith of the Dark Side of the Force, you already conjure to your mind the weapon that you must bring with you. You can see that gleaming blue blade of light and hear the humming of its swing. Once carried by Anakin before his departure to the Dark Side, then carried by Luke Skywalker, then to pass to Rey, now this officially licensed Luke Skywalker Lightsaber falls to your hands. Much has changed in the centuries since the star wars in a galaxy far, far away, but the blade still extends and lights up just as you remember. Perhaps slightly less active slicing and it no longer makes its own hums… but, let’s face it, you were going to want to make those yourself, anyway!

Monster Responds...
Hello, this Luke Skywalker lightsaber does not make any sounds.