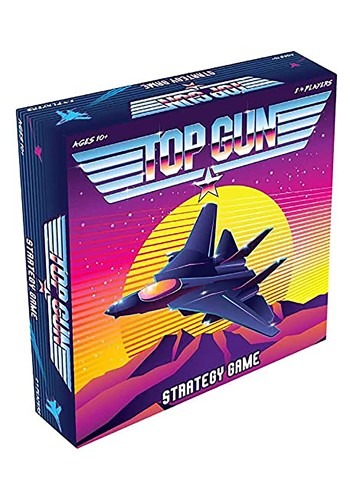 Let's get things straight. Top Gun might be the best 80s film of all time. That's a fact. But if you told us that we'd be playing a board game based on the volleyball game from the movie, well... we'd call you crazy. Here we are though, playing card-based volleyball game to help prove our skills as an ace pilot!

This Top Gun Strategy Game is officially licensed from the 80s film and comes with cards, aircraft game pieces, and a game board. All pieces come with a classic neon, 80s aesthetic. A typical game takes around 30 minutes and is best with 2 players, but can be played in teams.

This game is separated into two separate phases. First, you'll attempt to outwit your opponent in a game of volleyball, which consists of using hidden cards to try to reveal your opponent's whiff cards. The victor of the volleyball game gets to head into the second phase, which is a simulated dog fight, with a few extra bonuses. During the dog fight phase, you'll be using cards to maneuver around a hexagonal board to gather points and get a target lock on your opponent. Win the dog fight and you get the points to win the game!