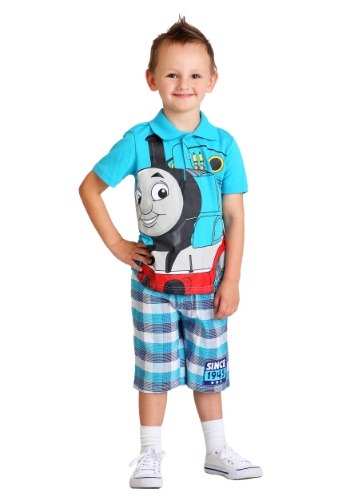 How does a train eat!? It goes "chew chew"! Alright, we can spare you all the train jokes and get back on track here. The most famous train of all has to be the fictional steam locomotive Thomas the tank. Thomas is a cheeky blue tank that has captured the hearts of millions of children and families since 1945! Optimistic, idealistic, and with a heart of a gold, your little boy would love representing his favorite train with his new Toddler Boys Thomas the Tank Engine Polo and Plaid Short Set.

The Railway Series were books that were first published in 1945 in Britain! These books included engine characters and their adventures throughout the lines. The creation of the railway series led to the birth of Thomas the Tank. The history of Thomas the Tank can be seen in this Toddler Boys Polo and Plaid shirt set. The blue plaid shorts feature a "Since 1945" printed on the left leg next to 3 stars, as well as an elastic waist for your growing conductor! An officially licensed graphic of Thomas the Tank is seen smiling on the front of this cotton and polyester polo.

Whether he is a passenger or an engineer, your toddler will go full steam ahead in his new Thomas the Tank Engine Polo and Plaid Short Set!