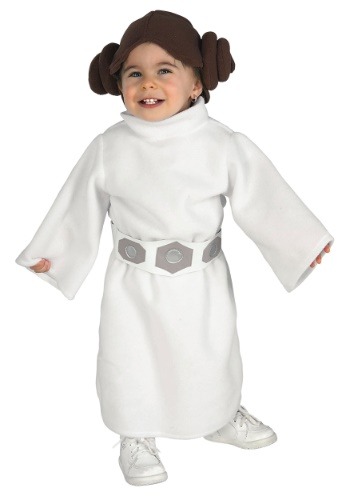 It’s no secret that your little girl is destined for great things! She might just be crawling around on the carpet and taking naps in her crib these days, but she’s going to be in charge as soon as she can walk. Then she’ll be giving the commands and planning all sorts of big decisions. Yes, she’s shaping up to become a regular Princess Leia!

You should be proud! In Star Wars, Princess Leia led the Rebel Alliance to victory over the tyrannical Galactic Empire. She successfully delivered the Death Star plans back to her base on Yavin 4. She commanded the assault on the Death Star. She safely evacuated her people from the Echo Base on Hoth when it came under heavy fire. She snuck into Jabba’s palace disguised as Boushh just to save Han Solo. Then, she blew up the shield generator on Endor’s Moon, allowing the Rebels to land the finishing blow on the Empire.

Maybe it’s time to let your little girl take the plunge! Just dress her up in this Princess Leia costume for toddlers and infants. It comes with a soft, white robe with an elastic waistband. It has appliqued silver adornments around the waist to help your little girl look like a real princess from Alderaan. It also comes with a cozy fleece headpiece that’s shaped like Leia’s signature hairdo. It’ll have your little one feeling warm, but it will also make her feel like standing up against the forces of tyranny in your galaxy!