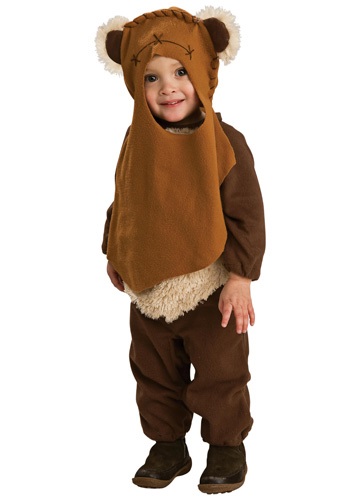 What do you when your toddler is a bit...rebellious? Your little one may want to help overthrow the Empire or maybe just nap time, but either way, we can think of no better costume for your bear to wear as he defends himself...to stay up past his bedtime.

Of course, now that your kiddo is dressed in this Toddler Ewok Costume, you will need to help him integrate him into everyone’s favorite furry species so he can grow into his role, gracefully. Bedtime stories must become tales of forest survival and impart to him that he lives on the moon of Endor, now. He already has that whole adorable curiosity thing down and he’s naturally a quick learner, so that will be an easy transition. And he is already getting pretty good at building things (though he hasn’t mastered a glider, yet). So it looks like he’s on the right track to helping the rebels win the Battle of Endor. Maybe another year or two.

One thing is for sure: it is important not to underestimate your little Ewok. Once you see him in this adorable outfit, though, it will be hard not to see him, immediately, as a fierce ally of the alliance. This look is both comfy, cozy, and cute--but don’t be fooled, your kiddo is a force to be reckoned with. Don’t believe us? Try cooking up some broccoli while he’s dressed in this tunic. Try serving it to him. Go on. Try it. See just how adorable your Ewok really is!