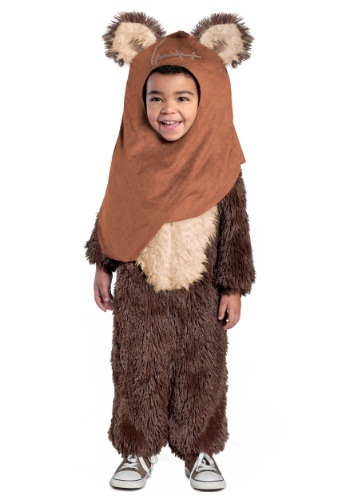 Were your kid's first words yub nub? If so, it's nothing to be weirded out by. Sure, most kids say "ma" or "daddy" first, but your kid's clearly from a galaxy far, far away... and things are just a little bit different there. For instance, bears are only about three or four feet tall, and they're somehow able to defeat elite, well-trained Imperial forces despite having primitive technology and weapons. But that's why we love Ewoks so much. They might just be the cutest denizens of the Star Wars universe, and that's what makes them a natural fit for your little one. So visit the moon of Endor this Halloween and bring your kid along in this Deluxe Wicket / Ewok Toddler Costume!

This officially licensed suit is a cuteness overload, and it's sure to be a hit with every Star Wars fan who sees your kid wearing it, no matter what their age. Made of faux fur from the finest faux herds in the galaxy, this costume turns any toddler into an irresistible (but fearsome, spear-wielding) teddy bear. It includes not only the furry jumpsuit, but also Wicket's (he's the one who led Princess Leia back to the Ewok encampment) signature hood. There'll be no mistaking your kid for a member of everyone's favorite Endorian tribe!

The Deluxe Wicket / Ewok Toddler Costume is perfect if you're doing a "family costume" this year, so be sure to check out our wide selection of Star Wars costumes and accessories. We've got something for every member of the family!