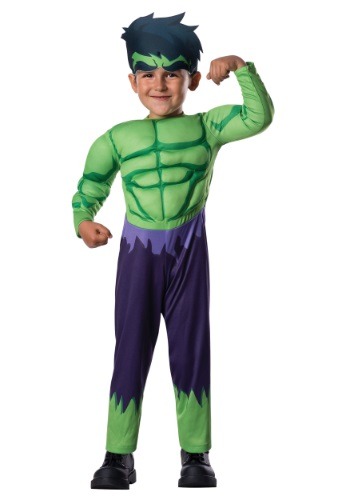 You know that weird psychological truth that is the smaller something is, the cuter it seems to get?  We’re not really sure where it came from, but it is impossible to argue with.  Cats?  Cute!  Kittens?  Squee!  Dogs?  Adorable!  Puppies?  Gimmie!  It works on just about everything.  Tiny bottles of water.  Little cans of soda.  Miniature giant space hamsters.  (What!?)  Anyway… it made us wonder about the opposite spectrum.  Anything huge is generally crazy intimidating and strong.  Colossus?  Pretty tough.  Giant armored Colossus?  Gulp!  So, obviously the Incredible Hulk is the epitome of that idea.  The angrier he gets, the bigger, tougher, scarier.

So, you see where we’re going with this.  Mix those things together!  Have you ever seen anything cuter than a small child getting angry?  Watching them contort their little faces in rage and maybe doing some wrestler style intimidation moves to try to convince you to give them that cookie jar!?  Well, we certainly wouldn’t be able to resist and maybe that’s the real power of the Hulk, anyway. And, with the way they’re growing, they’re basically bursting out of their pants, anyway!  It’s perfect!  So, it’s time to add some green to your team!

This Toddler Deluxe Hulk Costume is the perfect way to turn your little tyke into a little monster.  The deluxe green jumpsuit has fiberfill padding to fill out that muscle definition while the hulk hat, frankly, is cute enough to have them wear year round.  Bruce Banner’s goofy grin won’t be able to compare to your kiddo getting ready to show off that superhuman strength.  Add some Hulk Fist Gauntlets to really finish off the look.