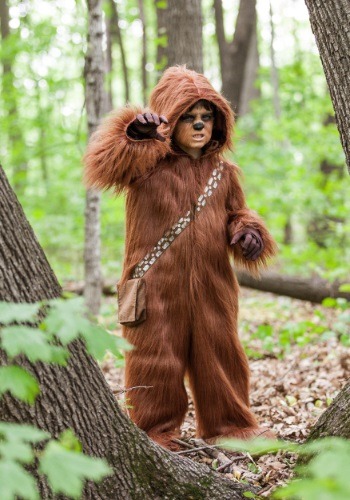 Trick question: What does a baby wookie look like? NO! It is not just an ewok. Those are completely different things. Baby wookies are just tinier wookies. C’mon, guys. Do you also think baby humans are just bushbabies? Even wookies go through toddler stages, but that doesn’t make them any less hairy or fearsome.

In fact, we think tiny wookies might be even more fearsome. Not only are they strong and brave, but they are small enough to sneak up behind you while you are doing the dishes. And nobody wants to trip over a tiny wookie. So, if you want your toddler to be as intimidating as a wookie, then throw them into this Deluxe Chewbacca Toddler Costume. Sure, they probably can’t quite make that guttural ululation that made Chewbacca famous in A New Hope, but we hear they can throw a tantrum that feels like having the “arms torn out of your sides” when they don’t get their way. Regardless of all that, this outfit might just inspire your kiddo to learn how to pilot a intergalactic starship, which we think is never a bad skill to have.

Just be careful of which friends they pick up along the way. Han Solo may be charming, but he’s also a scruffy smuggler indebted to the Hutts, so he may not be the best influence on your toddler. But rogue-ish best friends notwithstanding, pick up this costume for your little guy and let him be the best young wookie warrior this side of Kashyyk. Maybe one day he’ll be so lucky as to meet Master Yoda himself, so long as he avoids that nasty Order 66 business, which we’re sure he will.